The Government of India allowed up to 60% of domestic flights on 02nd September 2020.  It has now announced that it will allow 75% from the current level, announced Minister of Civil Aviation in an interview to press. 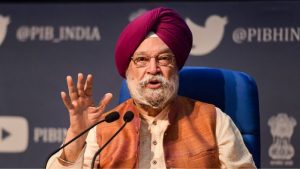 The Government of India has been relaxing the domestic flight’s schedule gradually since June 2020.  While it allowed 45% of the flights to be flown domestically on June 26, 2020,  it extended the same to 60% on 02nd September.  It is now expected that the same will be increased to 75% in the next week or ten days.

A restart of operations of domestic flights was allowed from May 25 this year.  There was a complete lock-down in March 2020 of all flights across all airports due to COVID-19 pandemic.  It was in May that the Government started allowing a 33% of previously operated schedule of Airlines and that too only addressing the domestic flights.

However,  scheduled international carrier operations remain suspended.  A clearer picture could emerge once the COVID-19 domestic situation is reviewed and depending upon the patronage by passengers at this 75% of operations.

TR hopes a full restoration is likely only in 2021.