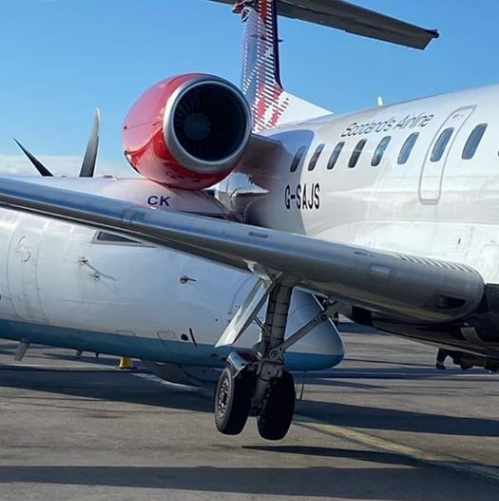 An ex-Flybe Dash-8 Q400 has collided with a Loganair Embraer 145 regional jet at Aberdeen airport.  An investigation has been launched into the incident which left the Embraer’s right main wheel dangling in the air.

The incident took place around 1800 UK time on Tuesday evening. The ex-Flybe Dash was being prepared for a ferry flight after being in storage in Aberdeen.  Nobody was on board the parked Loganair jet and there were no injuries in the incident.

In a statement Loganair said;

“A Loganair Embraer 145 regional jet, parked with no passengers or crew members aboard, was hit by a former Flybe Bombardier Q400 aircraft, which we understand was being prepared for departure after being stored at Aberdeen Airport.

“The nose of the Q400 impacted the rear starboard side of the Embraer, becoming lodged underneath and lifting the right main gear off the ground.

“The most important thing is that no-one was injured in the incident, with the crew working on the ex-Flybe aircraft being safe and well, yet understandably shaken.”

The incident has been referred to the UK Air Accidents Investigation Branch who  are making  inquiries and have started investigating.

Emirates is Planning to Open Air Bridges to Europe — Here's Why

Read More
Exclusive reports from insiders at Hong Kong International (HKG) airport, have arose stating a Cathay Pacific Boeing 777…
Read More
Ever wondered what paved the way in designing modern jets of today? The world’s first commercial jet de…
With many countries eager to restore their touristic industries back to pre-Coronavirus levels, Turkey becomes the latest to…