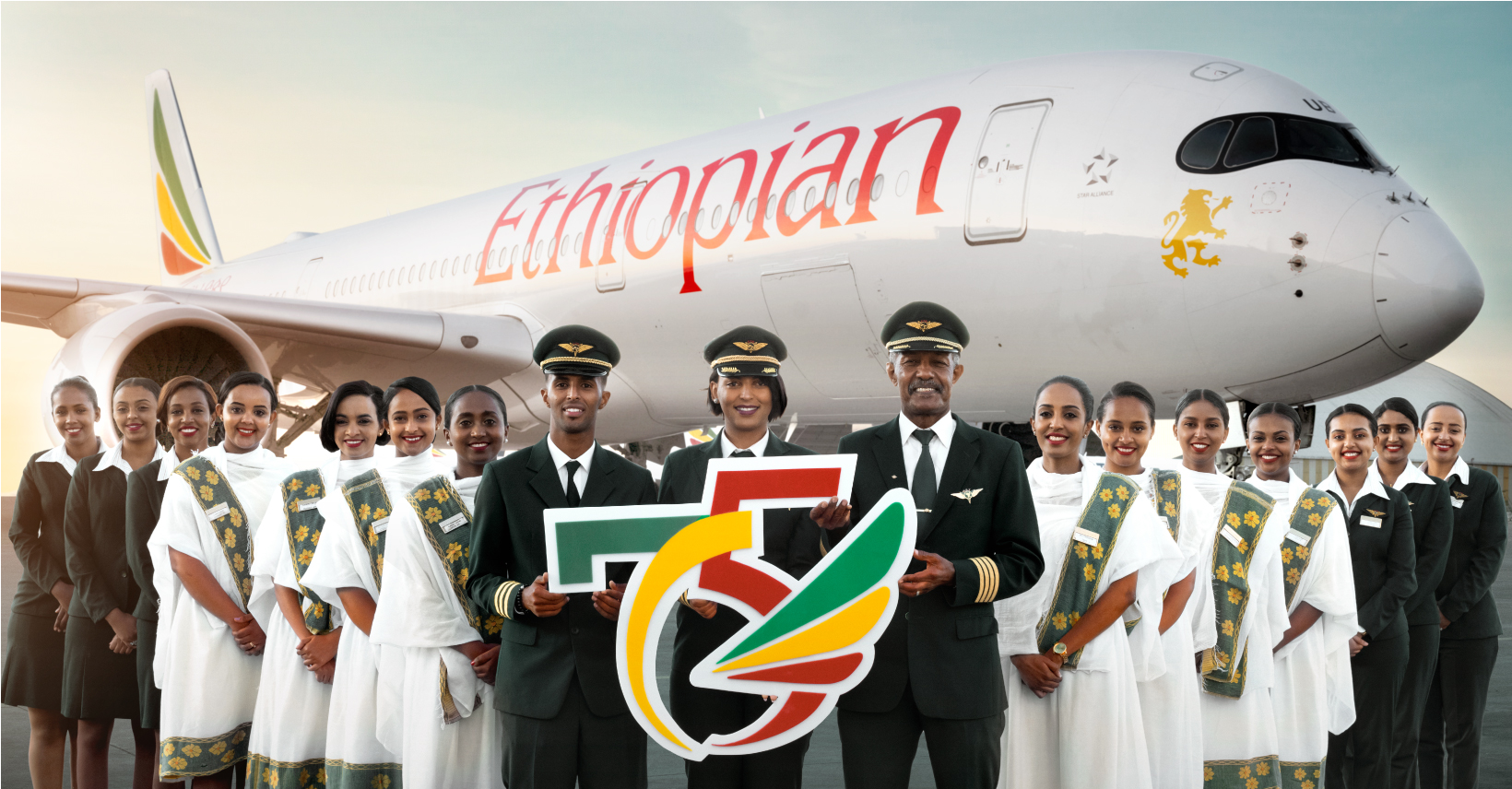 To celebrate their 75 years of Excellence, Ethiopian Airlines has provided for us a trip down memory lane with plenty of stories and photos on social media. Let us look at how it has become one of Africa’s leading airline to date.

How It All Began

Ethiopian Airlines (EA) was founded in December 1945 by Haile Selassie, Ethiopia’s last emperor and it was done to modernise Africa and provide a richer image to people overseas. It flew its first inaugural flight to Cairo in April 1946 with regular weekly services between Addis Ababa thereafter, this was followed by the start of international flights in 1947.

Initially, the government owned EA started with five C-47 Skytrains, but this quickly increased in numbers and EA expanded outwards to purchase Bombardiers and Boeings (EA being the first in Africa to order the Boeing 767 in 1982 and the first in the world to put the Boeing 767-200 into service).

Since then, the airline has a fleet size of over 120 aircrafts, travelling to over 140 destinations around the world, becoming Africa’s largest and most profitable airline to date. What exactly is their secret to success?

Part of EA’s success comes down to its ability to think strategically. With its hub, Addis Ababa at the centre of the world, it was able to make connections with disparate airlines and companies.

For instance, in 2008 EA entered into a code share agreement with Lufthansa which enabled EA to offer daily flights from Addis Ababa to Frankfurt, and then onward connections to destinations around the world. In 2010, EA entered a similar agreement with Scandinavian Airlines (a founding member of Star Alliance) which provided passengers flights between Europe and Africa, respectively. Such pacts have made EA the world’s 4th largest airline by the number of countries it serves – with connections to the Middle East, Asia, Europe, and North America, increasing traffic and demand from Addis Ababa. Indeed, during 2011 and 2019, EA managed to add nearly 15 million seats to their airline, that is a whopping 5 million more than Africa’s top 10 airlines.

Whilst the pandemic hamstrung the aviation sector and its carriers, EA remained unphased. Since 2018, the start of COVID-19’s pervasion, EA moved quickly by converting passenger demand into shipping demand. With eight dedicated freighters, EA freighted medical equipment and agricultural products to different countries, whilst increasing their cargo market share.

This led them to win the Export & Import Cargo Transportation award at a Customers Symposium organised by Guangzhou Bayiun International Airport in China 7 February 2018.  – one of many accolades EA has achieved. Furthermore, EA ploughed through the pandemic without asking for government aid, bailout or reducing employee’s salaries.

It is interesting that South African Airways (SAA) is not as successful given that it was Africa’s first lead carrier, yet it comes as no surprise. SAA, founded in 1934, has been struggling with years of financial challenges, along with internal dispute and reports of corruption. With that, SAA has now gone into administration and suspended their services which they blame on COVID-19.

It has often been thought that SAA’s failings provided gains for EA in several ways, such as code agreements with other countries and passenger demand. Indeed, EA has offered SAA the chance for a joint venture, but an agreement is yet to be made…

EA’s initial aim was to change the image of Africa for the world to see but given the many challenges (e.g., COVID-19) they realise that it is equally important to work with a world that is rapidly changing – so to stay profiting and relevant. Given that KLM is 101, the oldest airline to date, 75 is completely commendable for the airline age award.

What do you think about EA’s great achievement? Let us know below!

How Do They Wash The Outside of a Plane?

How Do They Clean the Inside of a Plane?

Read More
For those interested in looking at airlines’ financial statements, it may be useful to get acquainted with some…
Read More
The day we all have been waiting for is finally here! Popular European budget airline, Ryanair took delivery…