The Dubai Airshow 2021 is coming very soon and major companies such as Airbus and Boeing are exhibiting their aircraft and concepts there. This will be one of the biggest airshows this year as Boeing is planning to exhibit its Boeing 777-9, their latest wide body aircraft. The airshow will be held from the 14th to the 18th of November 2021.

Boeing Shows Off Its New B777-9 Aircraft

The Boeing 777-9, part of the Boeing 777X series, is the latest long-range, double-engined aircraft made from composite materials. The aircraft was initially designed in 2011 to compete with the Airbus A350 and subsequently launched in 2013. The engine used for the aircraft is the GE90 engine, one of the most efficient yet powerful engines in the world. In 2014, production of the aircraft begun, and it had its first flight on January 25th 2020. Deliveries of the aircraft are slated for 2024, following delays due to Covid-19.

In order to get more orders, Boeing is showcasing its Boeing 777-9 at the upcoming Dubai Airshow 2021. It will be the first time that this aircraft will be displayed up close to the public. 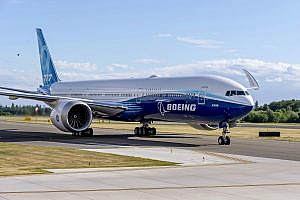 Another notable aircraft which will be on display at the Dubai Airshow is Etihad’s Airbus A350-1000. In June 2019, the first few of Etihad’s Airbus A350-1000s that were in mint condition were flown from the livery application site in Toulouse to Bordeaux for storage. Many were puzzled by this move as those aircraft were recently produced. Etihad has not disclosed a reason why they put the aircraft in storage, however, we now know that the aircraft will launch in 2022.

Those who are attending this year’s Dubai Airshow will be able to enjoy the experience of the new cabin design. 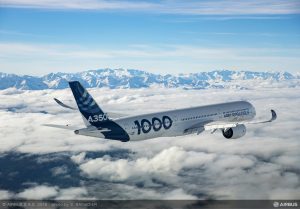 Ikrut Corporation Displays New A320 and B737 Competitor

Ikrut Corporation will be displaying their MC-21 aircraft at the Dubai Airshow 2021. The MC-21 is a narrow-body airliner built by the United Aircraft Corporation in Russia. The aircraft started development in 2006 to compete with the Airbus A320 and Boeing 737. Following several delays, the aircraft is set to launch in 2022 with Russian airlines and 2025 with international airlines.

As this plane is efficient and has been gaining popularity recently, it is a threat to Airbus and Boeing’s monopoly. This may very well be the future of aviation. All we can do is wait… 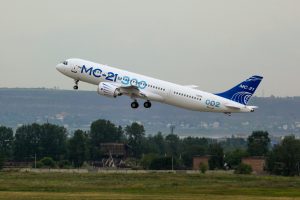 Ikrut’s New MC-21 Aircraft, which will be on display at Dubai Airshow 2021 | © Photo Gallery- Irkut Corporation

During the Dubai Airshow, there will be over 50 hours of conferences to attend, with some of these including Aviation Sustainability, Aerial Mobility and Cargo Connect. These conferences will be voiced by over 150 speakers and will take place between the 15th and the 18th November.

A new startup hub will be held at the Dubai Airshow for startups to get a voice and express their innovative ideas for the future of aviation. In addition, stakeholders will hold mentorship clinics to guide and educate the startups. They will also give lectures on how to be successful in the region. 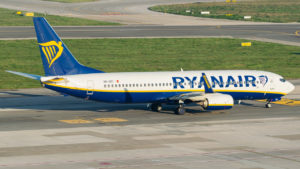 Another key feature of the Dubai Airshow 2021 is the “Tech Zone”, which is a showcase of tech including AI, 5G, cybersecurity and automation, to give us a glimpse of the future of aviation. Also, those with technological solutions will be able to display them at this event to buyers from the aviation sector.

Are you excited for the 2021 Dubai Airshow? Comment below.

New Airline Bonza to Bring Low Fares to Australia in 2022