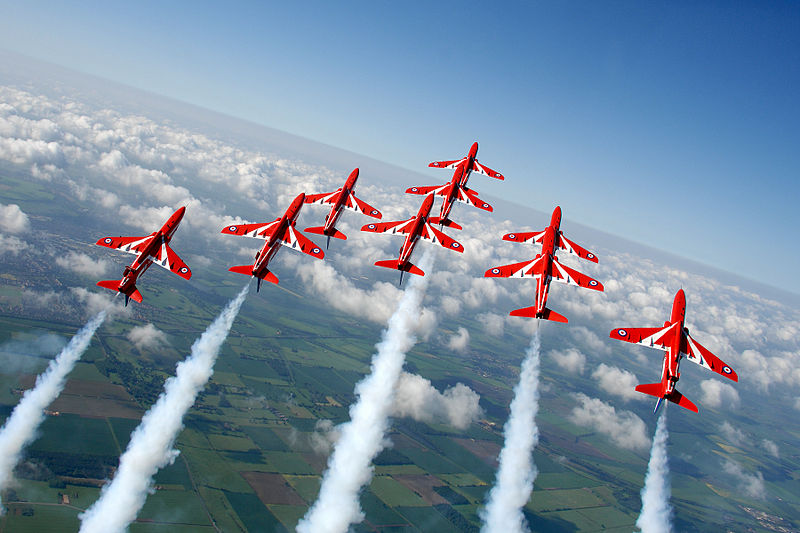 The Red Arrows are one of the most recognisable air display teams in existence. Their legendary displays have been an inspiration for children and adults alike and continue to amaze crowds across the globe. The Red Arrows story can be traced back to the earliest years of Royal Air Force aerobatics teams.

Close formation flying began during the First World War, as more firepower could be brought to bear on attacking fighters by bombers flying in close, mutually-supporting formations. In 1925, a squadron of brightly painted red Sopwith Sprites’ flew a daring display over Wembley exhibition hall. This incredible pyrotechnic display involved firing blank rounds into the crowds and fake bombs. A long tradition of display teams was born and by the 1960s there were many aerobatic teams within the RAF. The top brass worried too many pilots were concentrating on being great display pilots instead of on operational flying and decided the solution was to create one team to represent the entire RAF. In 1965, the Red Arrows were born.

Seven Folland Gnat T1 jet trainers, chosen for their simplicity and relatively low running cost, formed the fleet. By the end of their first season, the team had displayed 65 times in Britain and Europe.  In 1968, led by legendary display pilot Ray Hanna, the team expanded to nine aircraft and formed one of their most famous formations – ‘the diamond nine’. Having flown 1292 displays, the Folland Gnat was replaced by the Bae Hawk in 1979.

The team has nine pilots, all of whom are volunteers. Each pilot must have completed at least one operational tour and accumulated 1500 hours of flying time. Even then the competition to become a Red Arrows pilot is intense, with at least ten pilots applying for one available slot. The displays are varied depending on the weather with a higher cloud base allowing a more ‘vertical’ display. A lower base would dictate only rolling ‘horizontal’ manoeuvres, whilst in the worst case, the team will only do fly-pasts and steep turns. The team’s signature smoke is made up of diesel fuel that condenses as it leaves the engine with dye being added for the colours, creating a spectacular display.

In 2004, there was speculation that the government of the time would cut funding for the Red Arrows. Luckily, they survived and are a fantastic source of recruitment for the RAF and a great ambassador of the United Kingdom across the world. The Red Arrows will serve as an inspiration for thousands of people for generations to come.