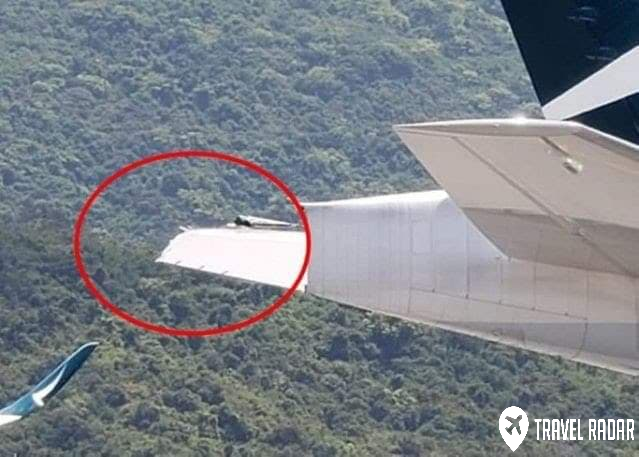 So what exactly happened?

It is thought that the Airbus A350 belonging to Cathay Pacific, was being towed on the ground – having shortly arrived at the airport – when the incident occurred. Images from the scene showed the impact on the tailplane of the Boeing 777 aircraft, and the starboard (right) winglet of the Airbus A350 aircraft, with damage to the shape and metalwork of the aircraft – Including cracks.

It is said that the airports Ground Controller received a call at 12:30pm (local time) alerting them to the incident that had occurred on Taxiway J – a taxiway dedicated for aircraft storage amidst the Coronavirus pandemic –  No passengers are believed to have been onboard either aircraft at the time of the incident.

In a comment provided to Travel Radar, Cathay Pacific said:

“Cathay Pacific confirms that there was a towing incident involving two aircraft at the airport this afternoon. There were no flight crew or passengers on board the aircraft. The airline will follow up with the services provider.”

Not the first incident this week…

Today’s report comes following a similar report at Dubai International earlier in the week, where a British Airways A350 (G-XWGB) collided with an Emirates 777 during pushback from stand. In the earlier incident, the aircraft was also being towed when it made impact with a parked 777 aircraft – in this case, belonging to UAE flag carrier, Emirates. Neither aircraft had any passengers onboard at the time of the incident.

What are your thoughts on these two recent incidents? Let us know in the comments below!

Updates as they come in:

Read More
If you are planning on travelling soon and are seeking options, Etihad’s latest offering may interest you. The…
Read More
The tit-for-tat squabble between the US and Chinese civil aviation authorities has all the dignity of a playground…
Read More
US airline Delta is running an initiative to fight racism and discrimination against Asian American and Pacific Islander…