Which aerobatic display team flies at over 700mph, looping and rolling, whilst maintaining a minuscule 18 inches between canopies and wingtips? Answer: The Blue Angels! The ‘Blues’ have been delivering high octane thrills to admiring crowds across the USA since 1946. They are the second oldest display team in the world, showing off the skills of the ‘best of the best‘ navy aviators. 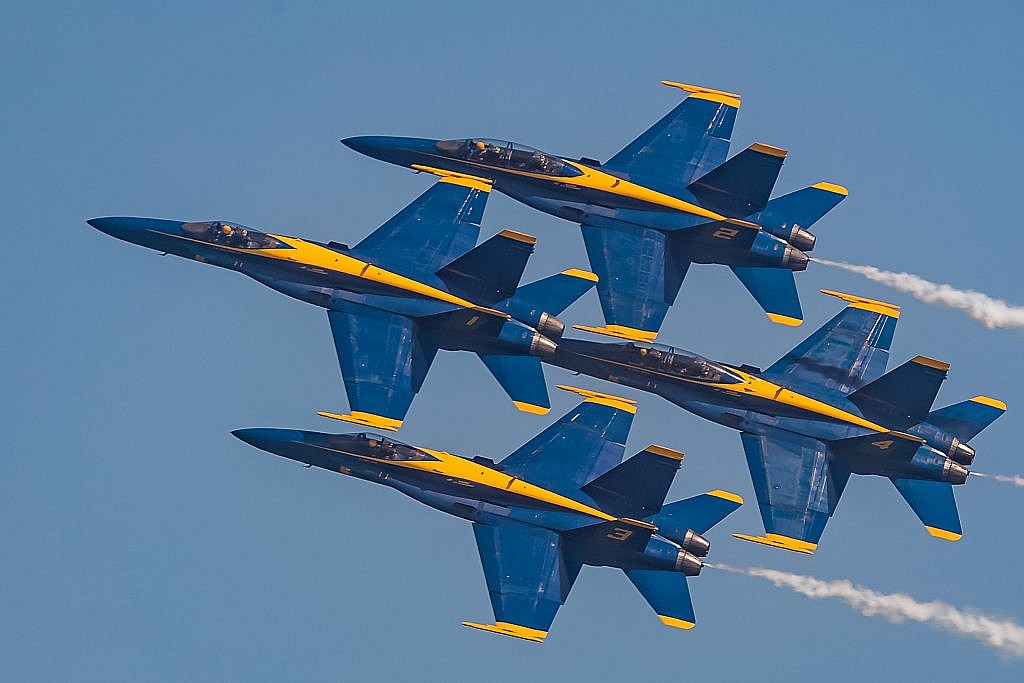 The Blue Angels came into existence in response to a shrinking Navy post-war budget. What better way to gain public support for Navy aviation then wowing the public with extraordinary flying skill? Admiral Nimitz charged World War 2 fighter ace, ‘Butch’ Voris, with forming the team and they began work immediately.

With a small fleet of Grumman F6F Hellcat aircraft, the team practiced in secret over the Florida Everglades, apparently so ‘if anything happened, just the alligators would know’! Many of the formations created during this time still remain as part of the show today. In the early years of the Blue Angels, a key feature of the display was a mock dogfight with an aircraft painted as a Japanese Zero. The Angels naturally won the fight! The ‘Blues’ have been through many Navy aircraft in their history, including the Skyhawk, the Phantom and now the Hornet.

The team use a modified F-18 especially developed for close formation aerobatic flying. The aircraft is so powerful it can make a loop with the landing gear down. Wing tanks contain smoke for the display and the control stick has been made to feel heavier then the combat aircraft, allowing for much more accuracy whilst flying so close to each other. Amazingly, Blue Angels pilots do not wear G-suits as the constant inflation and deflation is distracting. To overcome the high G forces, the pilots, instead, rely on specially developed breathing techniques. A typical display  includes a spectacular combination of loops, rolls, high speed passes and even belly to belly flying.

The ‘Blues’ have had many firsts in aerobatic flying. They had the first African American pilot, the first female pilot, and the first team to have used bio-fuel. The Blues are pioneers of display aerobatics and will continue to thrill crowds with their displays long into the future.

From Singapore with Love: BA Flight Transports Medical Supplies to the UK