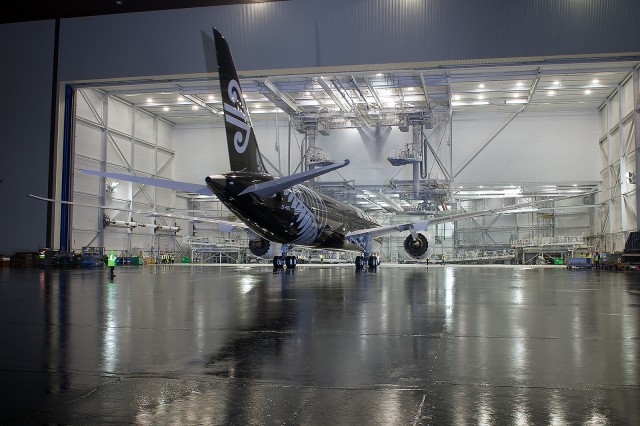 Early on Thursday morning, an Air New Zealand flight originally from Christchurch (CHC) to Guangzhou (CAN) made an unexpected landing in Hong Kong International Airport, just 73 nautical miles short of its destination after the pilots suspected a cracked windshield.

The Air New Zealand Boeing 787-9 Dreamliner registered as ZK-NZH was scheduled for a passenger flight from Christchurch, New Zealand to Guangzhou, China. Following an early descent initiated around 250 nautical miles from Hong Kong International Airport, the aircraft declared an emergency and landed in Hong Kong at 3:48 a.m. in the early morning. The fire brigade was called on standby and the flight landed without further reported incident.

Flight NZ1082 departed Christchurch at 21:45 p.m. local time and reached its final cruising altitude of flight level 410 after entering the Indonesian airspace. The aircraft kept its altitude until an unscheduled descent was initiated by the pilots at around 1840 UTC, 2:40 am at destination time. Following the initial descent, the aircraft entered a holding pattern south of Hong Kong for approximately 30mins at flight level 220 before turning onto the final runway course to land on runway 07R in Hong Kong International Airport at 1948 UTC (3:48 a.m.).

Crack in the Windshield

It was reported that upon entering Hong Kong airspace that the pilots suspected a crack in the windshield and decided to make an emergency landing at the nearest available airport. Whilst the incident would need to go through a thorough investigation before the details of the incident could be identified, the early descent would probably be caused by the recognition of the cracked windshield.

Common causes of cracked windshields include arcing of the window heating system, delamination, impact with foreign objects, natural aging of the heating film, etc. It is not common to have foreign objects at such high altitudes and the aircraft is relatively new (6 years since its maiden flight) so a faulty window heating system could be a possible cause for the incident. The windshield of a modern airliner usually consists of three layers, with the middle layer being vinyl and the outer layers being thermally tempered glass. The middle layer is capable of generating heat via the aircraft’s electrical system to make the entire windshield less brittle at high altitudes. At the cruising altitude of 40000ft without heating, the windshield is bombarded with freezing air at a temperature of -45 degrees Celsius, making the glass components more brittle and more susceptible to cracks.

Impacts of a Cracked Windshield

A cracked windshield could lead to a disastrous outcome. The infamous flight BA3590 operated by British Airways back in 1990 had its captain sucked out of the cockpit hanging on the window frame for 20 mins before the co-pilot made a miraculous landing. The cracked windshield caused rapid decompression, making the positively pressured cabin air from the fuselage gush out from the damaged windshield. The captain who had his upper body hanging outside of the wind frame survived miraculously despite being hit by freezing air at high speed for 20mins.

The rapid decompression means that the time of useful consciousness (TUC) could harshly decrease especially in higher altitudes. The TUC at 40000ft could be as short as 20 seconds, meaning that the pilots would become unconscious in less than a minute if no available source of oxygen is supplied. Furthermore, the gusting wind from the damaged window would send objects flying around, making the aircraft extremely hard to control. The disruption of the cockpit does not stop there, strong wind blowing into the cockpit would make communication with air traffic control and fellow crew members almost impossible.

In early January, another Dreamliner operated by LOT Polish Airlines declared a MAYDAY call after a suspected window fire was reported by the cabin. Find out more: here

Read Article
An IndiGo aircraft’s engine caught fire at Delhi airport yesterday night, causing a huge delay for those flying.…
Read Article
With the effects of Coronavirus rippling across the industry, many pilots are facing the inevitability of being furloughed…