Earlier this week, British-flag carrier, British Airways, announced that it will begin trialling a new travel health app, VeriFLY, with customers who are eligible to travel between London and the US from the 4th of February. The move comes as the industry looks towards health-passports as a way to resume normal operations again. 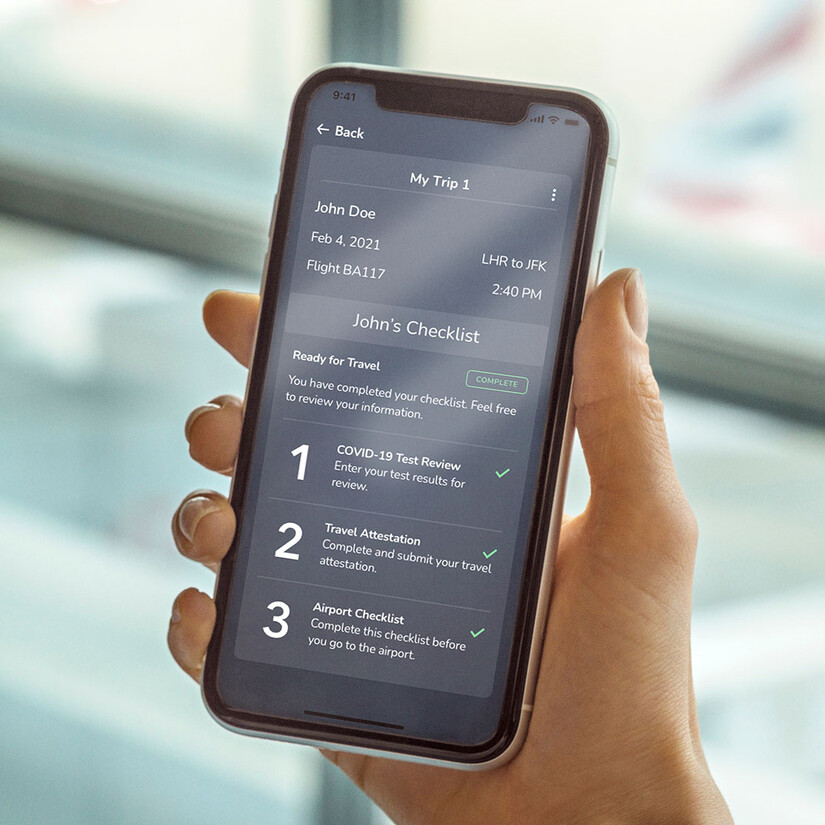 The new digital health travel passport, which can be downloaded to a mobile device, is designed to offer peace of mind before travel by checking customers meet the entry requirements of their destination by providing digital health document verification and confirming eligibility. Use of the VeriFLY app will be optional, and customers will also continue to be able to evidence they meet the US entry requirements at check-in.

British Airways is the first airline in the UK to trial the use of a mobile travel health passport for customers travelling from London. It will also be the only airline outside the US to offer its customers the opportunity to trial VeriFLY. The move comes following Oneworld operator, American Airlines, rolling out VeriFly to passengers, receiving much positive feedback.

Speaking about the carriers plans for the future, and the goal of VeriFly, Sean Doyle, British Airways’ CEO said:

“Although flying is currently restricted, it is essential we do as much as we can now to help those who are eligible to fly and prepare to help our customers navigate the complexities around changing global entry requirements when the world re-opens.

We remain focused and committed to finding user-friendly, evidence-based solutions to make journeys as seamless they can be. Through these trials, we hope to provide travellers and governments on both sides of the Atlantic with the tools and the reassurance they need to make safe travel possible.”

VeriFLY has been pioneered by private software company, Daon, which also works with some of the world’s leading banking and credit card companies. The software will allow people to combine travel verification documents and Covid-19 test results in one place, ensuring travellers are fully compliant with the entry requirements for their destination before leaving home. Certified customers will be fast-tracked through the airport where specially designated desks will be available for check in.

VeriFLY can be downloaded to a customer’s mobile device with ease from the iOS App Store or Google Play Store. After creating a secure profile, the platform prompts customers to confirm their flight information, upload details of a negative Covid-19 test result and any other essential documentation. The software confirms the test matches the country’s regulations with a simple ‘Pass’ or ‘Fail’ message. VeriFLY will also provide users with reminders once the credential has expired. 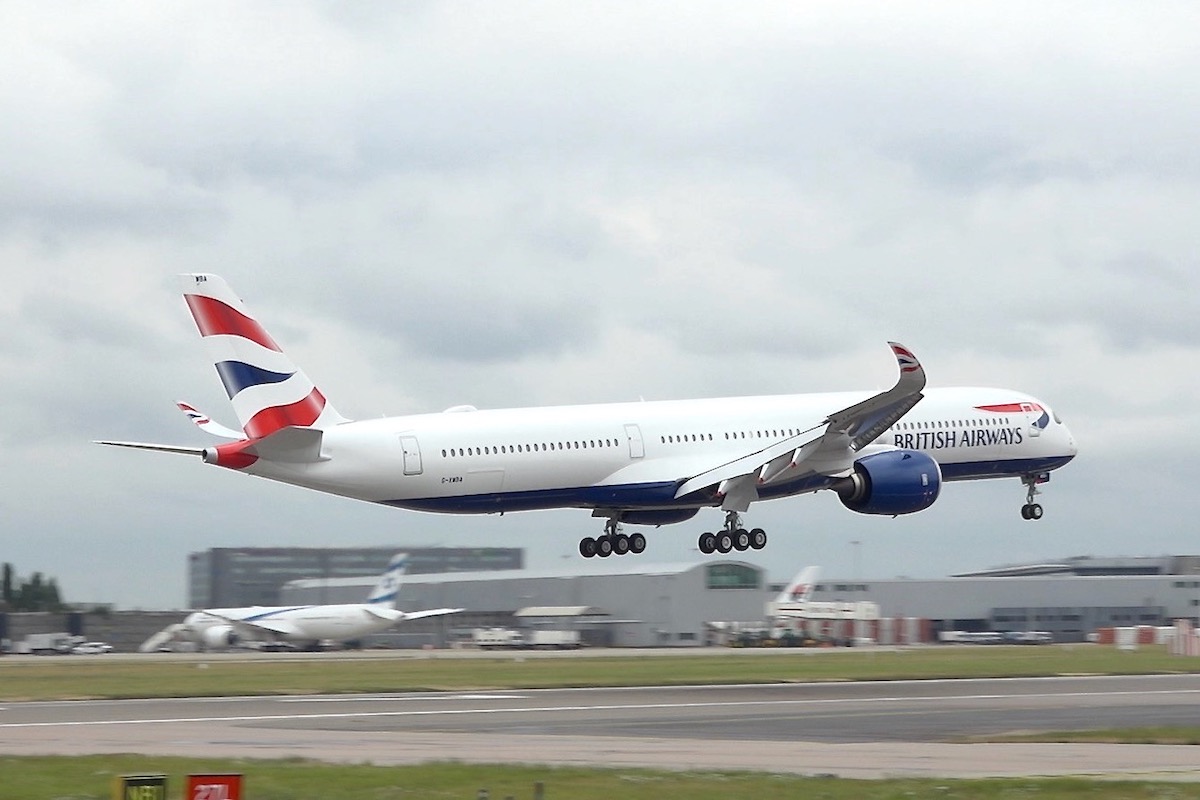 The carrier’s future plans for VeriFly 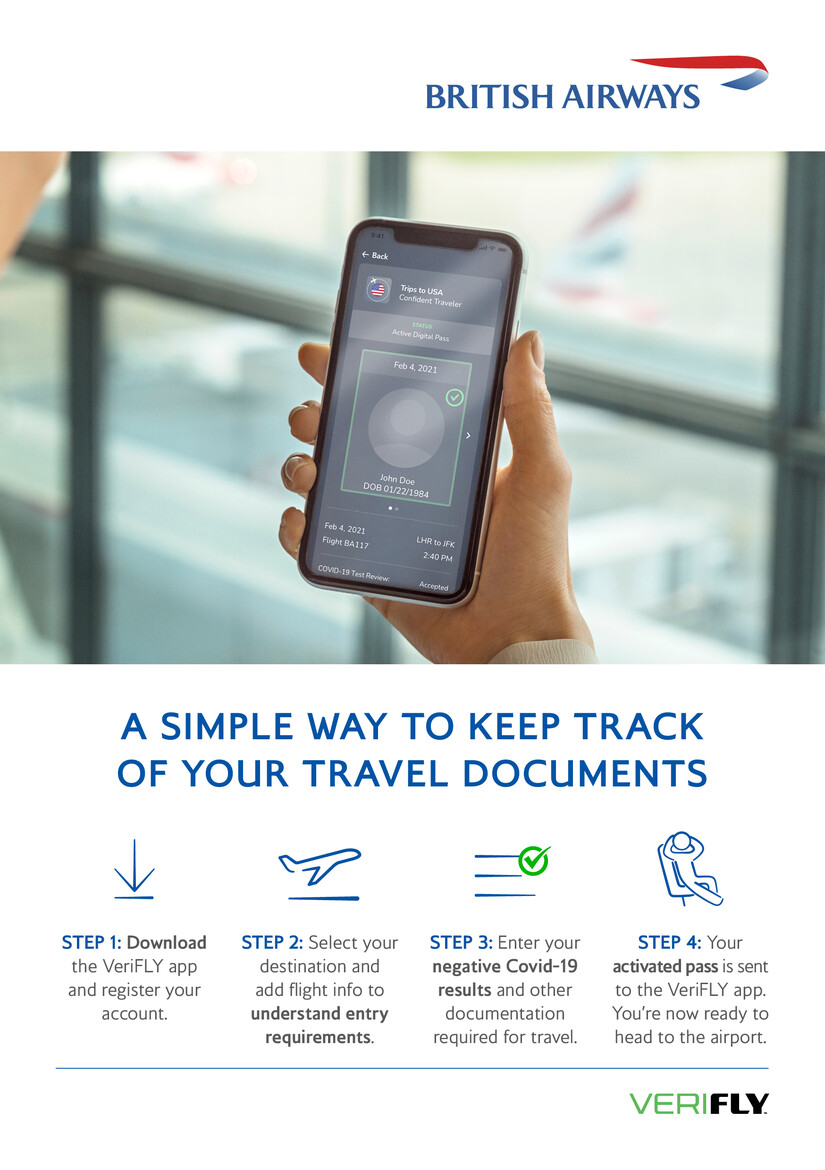 The British Airways VeriFLY trial will begin from the 4th of February 2021, for customers travelling from London to all US routes currently operating, and will be updated to ensure conformance with the latest UK government requirement for a declaration around the reason for travel once the airline has clarity on the legislation. British Airways US routes currently operating are London to New York JFK, Los Angeles, San Francisco, Boston, Chicago, Dallas, Miami, Washington, Houston and Seattle, with more services expected as air-travel picks up again during 2021 with the hopes of a successful vaccine roll-out.

Following the trial will come phase two, which will extend to cover customers travelling to the UK from the US across both carriers. This will make British Airways and American Airlines the first transatlantic partners to offer a digital solution for eligible customers flying to the UK.

British Airways is also simultaneously conducting a testing trial with American Airlines and Oneworld on some routes from the US to the UK. The results of the trial will be shared with Oxford University, the academic partners and with governments on both sides of the Atlantic.

What are your thoughts on VeriFly and other digital health-passports/passes? Would they make you feel safer flying? Let us know your comments below.

Lufthansa Commences their Longest Ever Flight