As Boeing’s crisis with the 737 MAX continues to deepen, the company is reported to be in talks with banks to borrow at least $10 billion.

Following the fatal crashes in October 2018 and March 2019 killing 348 people, the Federal Aviation Authority (FAA) grounded the aircraft. The MAX production line at Renton has now stopped production of the aircraft after announcing a suspension in December last year.  Boeing continues to work on fixing the problem with the MCAS flight control software amidst reports of further software and wiring issues. 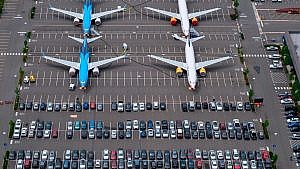 The FAA is unlikely to approve a return to service until March or April this year, and many airlines including American and Southwest are assuming the MAX will not be available until early June.

So far, it’s reported that the Seattle manufacturer has secured at least $6 billion from Citigroup, Bank of America, JP Morgan and Wells Fargo. The planned loans are two-year, delayed draw loans; in effect a pot of money that Boeing can tap into as needs arise.

Boeing doesn’t receive the bulk of payments for aircraft until they are delivered, but are obliged to pay suppliers, hence their massive and increasing debt. Their long-term debt at September 30, 2019 was nearly double that at the end of 2018, amounting to $20.3 billion. It’s estimated that the costs of the grounding are more than $9 billion to date and the company is losing about $1 billion a month; it has reported a negative cash flow of $3 billion for the third quarter of 2019. The interest on the loans will add to the debt.

Boeing has declined to comment on further details of the loans.

Russian Plane Crash with No Survivors