South African Airways has cancelled 16 domestic flights and the international flight to Munich yesterday, Monday apparently due to low demand. Passengers were being booked on alternative flights. According to EU rules, the cancellation of the Munich flight will trigger payments of €600 to each passenger. 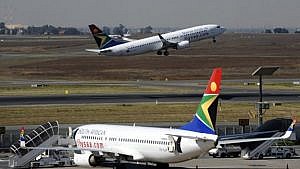 Further flights between Johannesburg, Durban and Cape Town are cancelled as far ahead as 24 January.

SAA has said that it will advise further today, Tuesday.

The cancellations follow a failure on Sunday by the South African government to supply the airline with a promised $138 million (ZAR2 billion) to continue operations. There is speculation that the failure is a result of differing opinions at the Treasury on the wisdom of the move. In the last few days SAA has put the majority of its aging A340 aircraft up for sale to raise funds. Some of the its international routes are now being flown by four new A350 aircraft.

Confidence in the airline has plummeted after a crippling strike late last year and as a result of the carrier being placed into ‘business rescue’, a form of bankruptcy protection. It’s difficult to see how the failure to attract bookings can be reversed or even slowed.

If the anticipated cash injection is not forthcoming very quickly, the airline may be forced to cease operations completely in the next few days.