For many people in Europe, the Canary Islands is the most popular vacation spot in the summer and winter! However there are many islands in the Canaries and almost all airlines only fly to Tenerife or Gran Canaria, the most famous of the islands. But in order to fly to another smaller island in the Canary Islands, you will most likely fly the region’s main airline: Binter Canarias. In this article, we are going to take a closer look into Binter Canarias.

A Binter Canarias Aircraft Coming In For a Landing | Wikipedia

What is Binter Canarias?

What are the destinations Binter Canarias serves?

What aircraft does Binter Canarias have?

Binter Canarias has a good amount of short-haul aircraft to serve their multiple destinations nearby. As of 2021, Binter Canarias has 6 ATR 72-500, which is being replaced by the 17 ATR 72-600 that joined their fleet a few years ago. Also, Binter Canarias recently received 4 Embraer E195-E2 with one more to come. However, previously, Binter Canarias had a diverse fleet of aircraft that was retired due to old age or inefficiency. These aircraft include a Boeing 737-400 in a special “Islas Canarias” livery, the ATR 72-202, the CASA 235, which was the first aircraft they ever operated, followed by the CRJ-200 and CRJ-900. 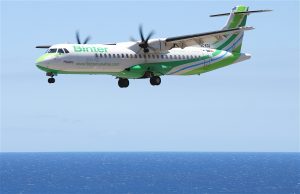 How many accidents has Binter Canarias been involved in?

Surprisingly, Binter Canarias has a very clean record in their long 20+ years of service, with no fatal accidents and one minor incident. The minor accident happened in 2016 on an ATR 72-600 that was on a training flight to and from Tenerife. Shortly after take-off, the aircraft had a problem with the gear. It was found that both tires of the left main gear had burst! Due to this, the pilot diverted the plane to Gran Canaria Airport and after two low passes above the runway, the aeroplane landed safely on the ground with no casualties. 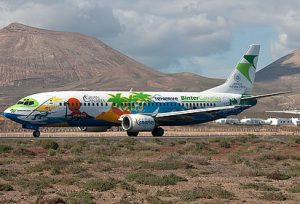 What are the awards that Binter Canarias have won?

Due to Binter Canarias’ high levels of service, they were named “Europe’s Best Regional Airline” in 2005, resulting in a special celebratory livery being installed on their only Boeing 737-400. Also, in 2010 and 2016, they won Europe Regions Airline Association Gold Award for “Best Airline of The Year”.

In 1988, Binter Canarias created a “Sister Airline” called Binter Mediterraneo. The airline linked the city of Melilla to Malaga, Almeria, Valencia and Madrid! Their fleet comprised of 5 CASA CN-235 Aircraft. However, the airline ceased operations in 2001 due to a fatal incident onboard one of their CASA CN-235 aircraft near Malaga. On 29 August 2021, A CASA CN-235 with registration EC-FBC was performing a regularly scheduled flight from Melila to Malaga with flight number IBB8261. The aircraft reported an engine failure on final approach in Malaga and subsequently crashed next to N-340, a major highway in Spain. Four passengers sadly lost their lives in the incident. 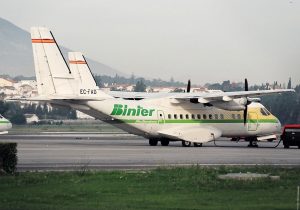 Recently, a new startup airline called Canarian Airways was announced. The airline would fly from Gran Canaria to Mainland Spain and beyond! This airline is likely to cut into Binter Canarias’ stake of revenue but it will still be a long time to come before the new airline debuts.

My experience with Binter Canarias:

In 2019, I flew with Binter Canarias on a short 20-minute hop from Gran Canaria to Tenerife. The service onboard was amazing and I was surprised that they served me a snack on such a short flight, when bigger airlines, such as Finnair, would not even serve food on a 7-hour flight! I enjoyed flying with Binter Canarias and I look forward to flying with them next time I am in the Canary Islands.

Have you flown with Binter Canarias? Comment  your experience below.

FlyBig– A Startup Formed During the Pandemic

Sustainable fuel will power 12.5% of Ryanair flights by 2030