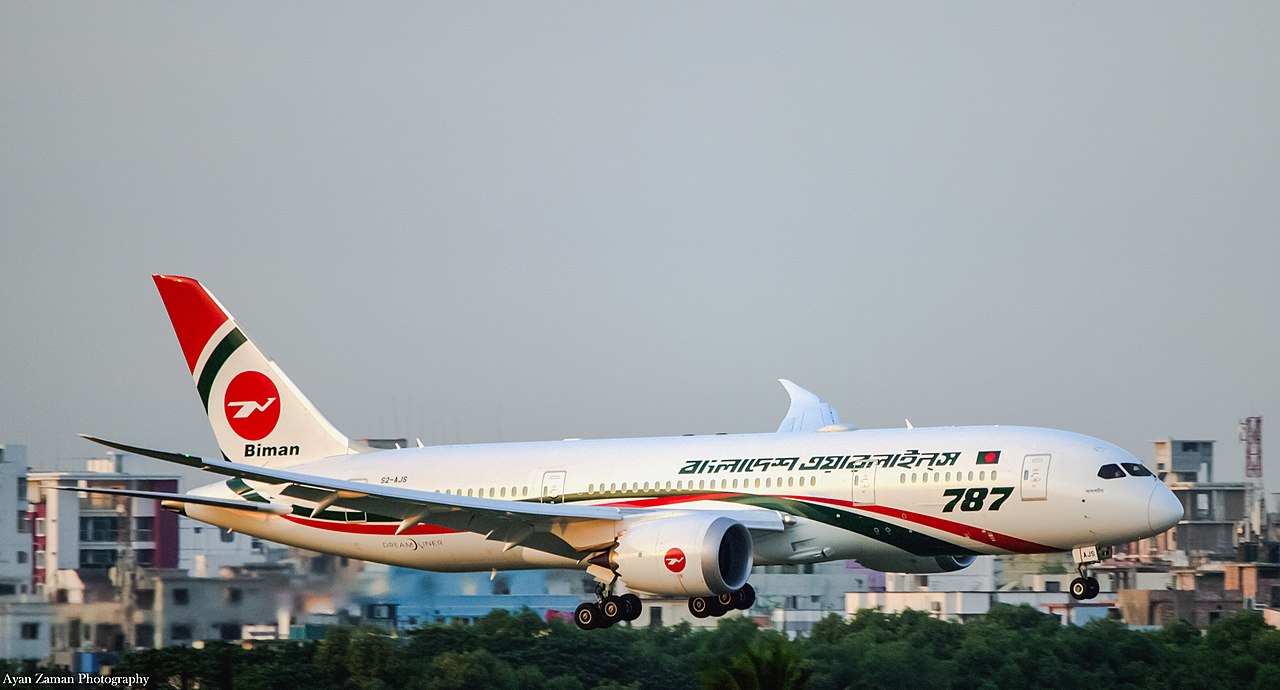 Biman (Bengali for ‘aeroplane’) Bangladesh is based at its main hub at Hazrat Shahjalal airport in Dhaka.

The airline was founded in January 1972 by 2 500 former employees and pilots of Pakistan International Airlines, following the independence of the former East Pakistan in 1971 into the modern state of Bangladesh.

The first services were operated by a single Douglas DC-3 with domestic flights to Chittagong, Jessore and Sylhet. The signs were not good for the fledgeling airline when that aircraft crashed in February 1972, but the Indian government supplied two Fokker F-27s, and services continued. Shortly afterwards a leased Douglas DC-6B was placed on the Dhaka-Calcutta route and long-haul services began in March to London using a chartered 707 from British Caledonian.

Through the remainder of the ’70s, the Biman fleet expanded with additional F-27s and Boeing 707s, expanding its routes to include Kolkata, Doha and Amsterdam. The airline moved away from a wholly-owned and operated state institution to a public sector corporation (having the ability to sell shares to the public) in 1977. After loss-making in its first years, the airline made its first profit in 1978-79.

In the early ’80s, Biman acquired a Fokker F-28 and retiring its 707s, obtained three DC-10s. However, in the ’80’s and ’90s, the results of various audits and investigations showed vast over-staffing, massive corruption and mismanagement, with many suppliers and taxes being unpaid. In 1998 and 2004 the government offered shareholding to foreign airlines, but due to the insistence of the Bangladeshi government in retaining many decision-making powers, the offers were ignored.

In 2007 the carrier continued on a path of slow and partial privatisation when it converted to a public limited company, with the government owning 51% of shares and the private sector the remainder. Significant losses were made in the period 2010 to 2013 and in 2017-2018 but Biman ended the decade with a profit of $28 million.

Biman has modernised its fleet in the last decade. It currently operates six B737-800s, four B777-300ER six of the B787 family and 2 Bombardier Dash-8 Q400s, with five on order. The airline now serves 17 international routes including Kuala Lumpur, Qatar, Bangkok and Manchester. Aside from scheduled services, a substantial income is derived for the annual Hajj pilgrimage flights to Jeddah in Saudi Arabia.

Biman Bangladesh is one of the smaller operators in Asia and has had its share of difficulties typical of state-owned airlines. Its passenger services—particularly on the ground—is perhaps not of the highest standard, but with a modern fleet, it is now able to operate a modest network with some success.

Read Article
As Asia opens up its borders to welcome more international travellers, a sense of normalcy has returned to…
Read Article
Two aeroplanes collided at Heathrow Airport in London on Wednesday evening. The collision was minor, with a Korean…