An Airbus A321 of Vietnamese low-cost-carrier Vietjet has suffered a runway excursion at Ho Chi Minh International Airport (formerly Saigon). 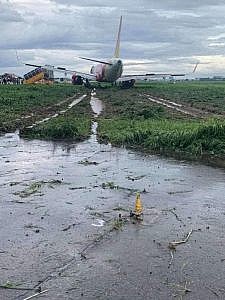 VN-A657 was arriving from Phu Quoc island in the south of the country when rolling out on runway 25L it left the tarmac and ploughed through several metres of muddy turf. From photographs it appears the right main undercarriage of the aircraft is almost buried in the ground, the CFM56 engine seems to be resting on the mud. One of the tyres on the undercarriage has almost shed its outer tread.

The aircraft was landing in gusting winds and squally showers. Thunderstorms were reported in the area. Happily ‘The airplane, passengers, and crew are all safe,’ says VietJet. ‘All passengers were disembarked and transferred to the airport’s arrival terminal as normal.’