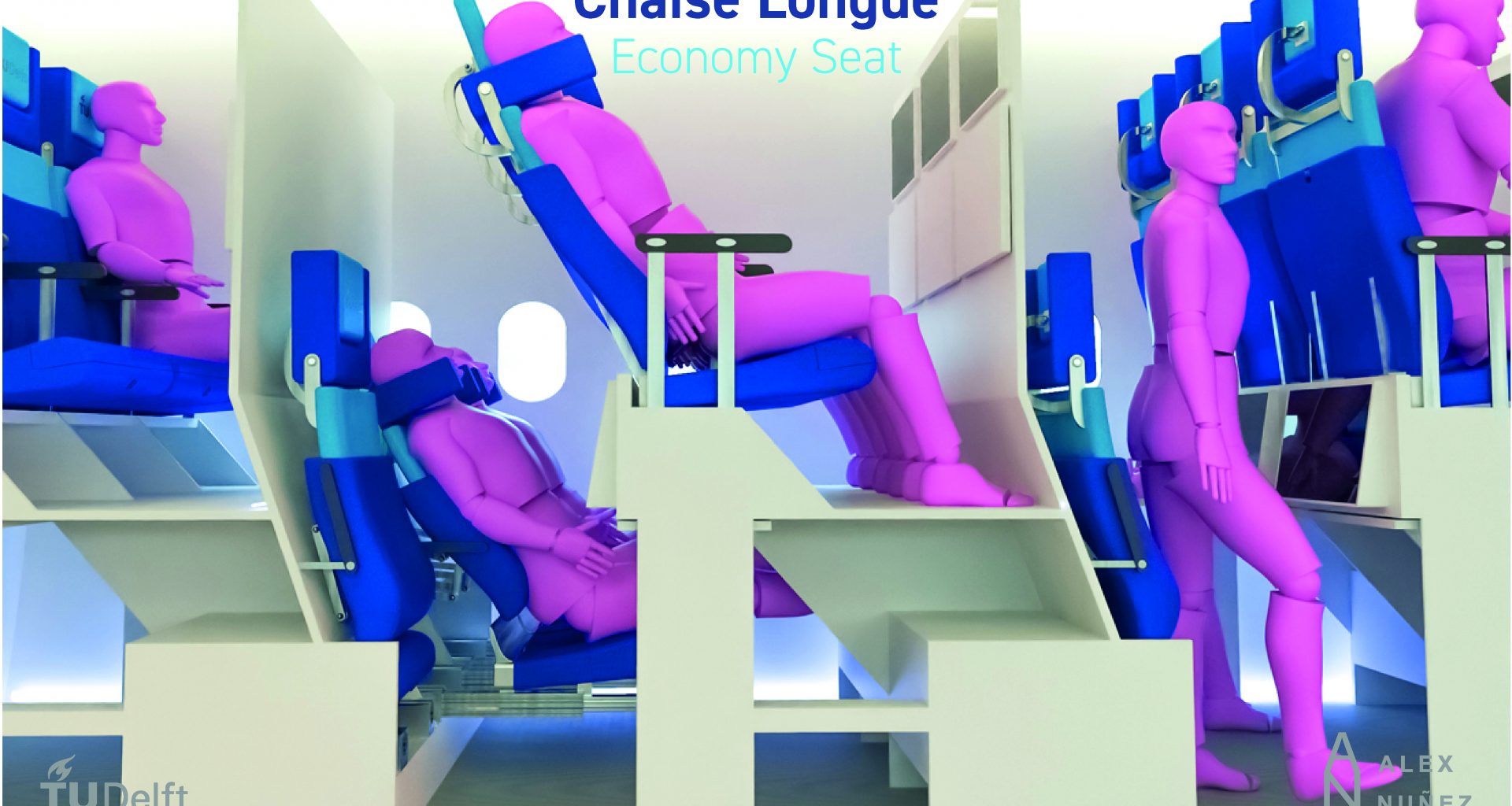 The Chaise Longue Economy Seat, a new double-decker seat concept has been designed for aircraft, offering optimal passenger comfort and reducing space. Since the start of the project, the end goal for this design has always been passenger comfort; the chairs can recline in multiple positions without disturbing the passenger behind.

Interview with the Designer

“This seat has been thought to be built in a way that gives comfort to passengers and also makes the flights more efficient, so reduces the fuel consumption and reduces the carbon footprint as well.”

The reason this concept weighs less than conventional airline seats is due to the product being one piece instead of three. Overhead storage compartments will be placed underneath the seat instead. I asked Vicente whether storage size would be compromised due to this, he said that the storage space is the maximum size standard defined by the IATA.

How Did the Project Start?

The project started at TU Delft University in the Netherlands. Vicente was assigned to create a new economy seat concept for the Delft Flying V, an aircraft designed to carry passengers in its wings. Vicente later realised that his same design could be implemented in conventional aircraft.

With the design being lighter in weight and constructing double-decker style seats, airlines will be able to fit more seats in the aircraft. Vicente said their goal is to maintain the 32-inch Seat Pitch, which is standard for long-haul flights. However, it’s possible to reduce this to as low as 29 inches. Vicente explained this his design benefits both passengers and airlines, resulting in; a more comfortable flight for passengers and offering 10 – 20% increased seat capacity for airlines.

No Shame in Reclining

The seat can be reclined up to 125 degrees, which according to Vicente, is almost 10 degrees more than standard economy seats in the market right now. Passengers sitting in the lower row can stretch their feet in the space below the passenger seats above; Vicente explained this inspired him to name it Chaise Lounge.

From research, passengers’ most preferred thing to do on long-haul flights is sleeping. So, we’re trying to give a full-on experience and make passengers enjoy the trip. Not just to get from point A to point B.”

Do you think this new design will take off? Let us know in the comments below.

Read Article
The ultra-low-cost carrier easyJet will give new and existing cabin crew a £1,000 bonus in an effort to…
Read Article
Sheremetyevo International Airport in Moscow has closed a major terminal in response to the restrictions imposed on the…