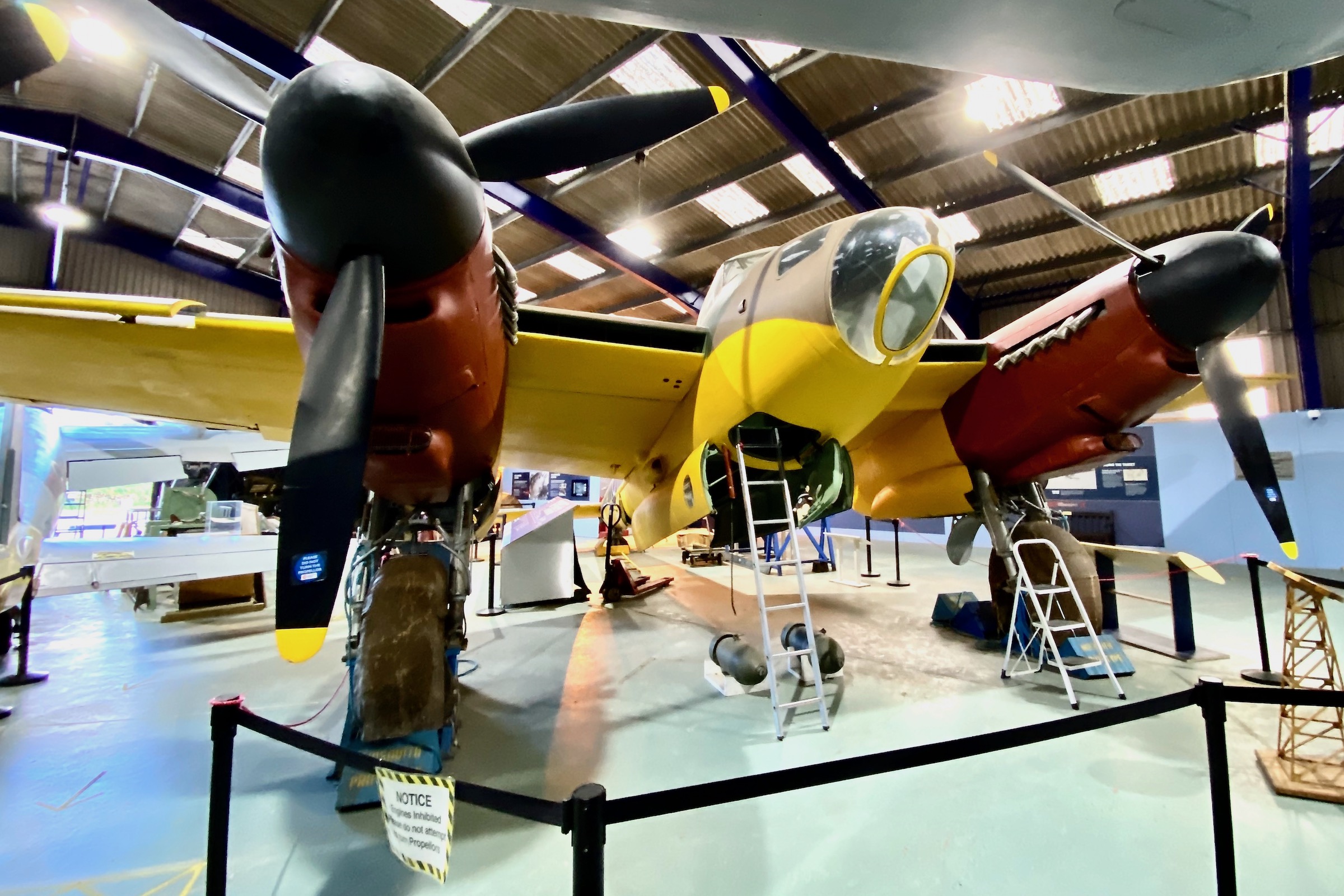 I was thrilled to see some lovely old planes in a field ahead of me.  I had just arrived at the de Havilland Aircraft Museum in Hertfordshire.  This museum is the oldest aircraft museum in the UK.  It is also the only museum devoted to one aircraft builder, de Havilland.

Sir Geoffrey de Havilland was both a pilot and a pioneer in aircraft design.  He was the founder of the de Havilland Aircraft Company.  This company concentrated on civil aircraft initially for airlines and then he began building light aeroplanes for private owners.  This venture was very successful and de Havilland earned a reputation as creator of the private light aeroplane.  His Moth biplanes were particularly successful.

De Havilland had to work hard to convince the government that his lightweight wooden fighter plane was ideal for combat during World War II.  He finally won approval and the Mosquito went into production.  It was one of the fastest and most versatile aircraft produced during World War II.  His biggest success.

The de Havilland DH-98 Mosquito, generally known as the Mosquito was a British twin-engine, two seat, mid-wing bomber aircraft.  The component parts were a wooden frame covered with a skin of plywood.  It was assembled in England, Canada and Australia and flown by air forces worldwide.   A total 7,780 Mosquitos were built in forty-two different versions.  It was used as a bomber, a fighter, a night fighter, a high altitude fighter and a photo-reconnaissance plane.

The origins of Salisbury Hall go back to the fifteenth century.  It has been home to many famous people including Nell Gwynne.  When de Havilland left Salisbury Hall in 1947 it remained unoccupied for 8 years.  When Walter Goldsmith acquired this historic building it was on the understanding it would be open to the public.  He discovered the link to the Mosquito and was able to trace the DH-98 Mosquito prototype.  It desperately needed a new home under cover.  This was provided by the addition of an old hangar to the property.  It was the beginning of a collection of aircraft that was to form the nucleus of the de Havilland Aircraft Museum.

Today, the elegant Salisbury Hall, surrounded by its own moat, is occupied by a firm of architects.  It is not open to the public.

Since the de Havilland Aircraft Museum first opened its doors to the public in May 1959 it has developed into an exciting attraction.  Entrance is through a shop and café into the first of two large hangars.  Alistair, the curator, gave me a short history of the Mosquito and the museum itself.  Two large hangars contain the most important exhibits.  The layout is very good.  It is easy to walk around the planes and  each one has its own information board.  There are friendly, knowledgeable volunteers stationed around the hangars ready to answer any questions.

This museum caters for groups and families.  Activities available include a flight simulator experience (pre-booking required). Alistair, the curator, has made some podcasts in which he introduces the planes on display at the museum.  These are available on the museum’s website – a good option if it is not possible to visit the museum.

Read More
Deserted airports, grounded aircraft fleet and only a handful of passengers; truly these are unprecedented times. In the…
Read More
Everyone one of us has -at some point- come across aircraft which are so bizarre-looking; we have a…
Read More
Earlier this morning, Wednesday 22 July 2020, an Ethiopian Airlines Boeing 777F (Cargo) aircraft caught fire on the…