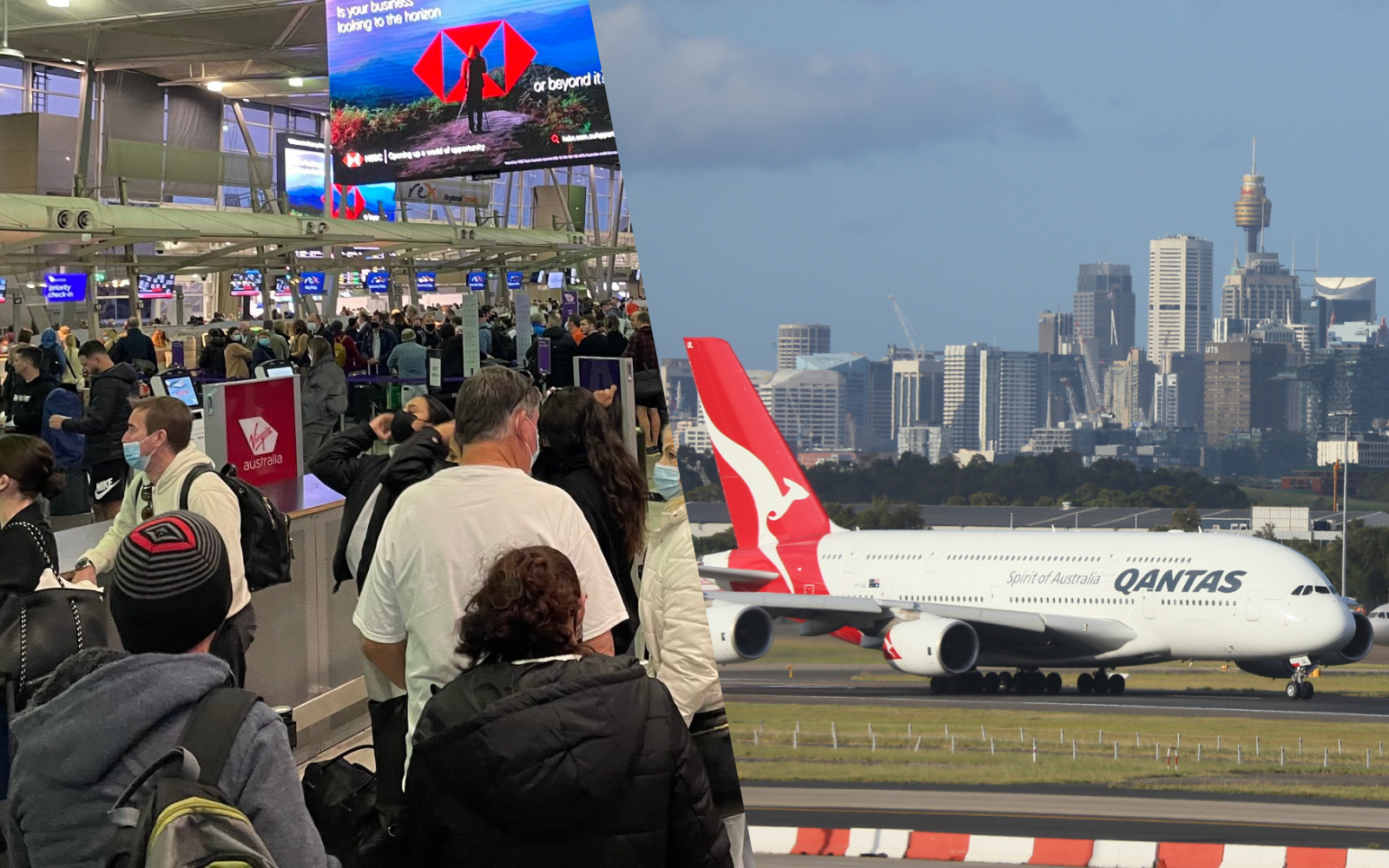 Holiday time is usually welcomed by people with open arms. It’s a time to get away from work, spend time with loved ones and leave the world’s shenanigans behind. However, for the unwitting staff at Sydney Airport, holiday time strikes a nerve. After Sydney fully reopened to international travel earlier this year, its only international terminal became overwhelmed with the sheer volume of people travelling in and out of the capital. Ask any airport worker from that fateful Easter holiday, and they will have a few tales that strike fear deep in their core.

Sydney Airport Is At Capacity, And It’s Going To Get Worse, Much Worse…

Flashback to just April when Sydney Airport saw thousands burst through their gates, many airport staff left figuratively with PTSD from Easter weekend. Things are shaping up much the same way this week with the Queen’s Birthday holiday weekend ahead. Large crowds fell upon Sydney’s only airport from around 5am on Friday, with numbers set to increase throughout the weekend. Similar scenes caused more delays and queues extending out of the terminal on Saturday morning, with a Twitter user describing the scenes as “organised chaos”.

Please arrive as close as possible to 2h prior to domestic flights. Unless advised by your airline do not arrive any earlier, as you may not be able to check in your bags.

Sydney Airport advised travellers via Twitter to turn up no earlier than two hours before their departure time unless directed otherwise by an airline. However, this did not stop the Virgin Australia terminal queue from spilling outside by 6:30am. With over 80,000 holidaymakers expected to filter through the airport on Friday, it didn’t take long for Green’s Senator David Shoebridge to point out that the airport should be better prepared to cope with such numbers.

Another holiday and another meltdown at Sydney’s privatised airport. Massive queue for bag drop then another one for security. They knew in advance how many people were coming because they sold tickets. Less staff = more privatised profit 😡 pic.twitter.com/8DMe0aiSyf

A Sydney Airport spokesperson commented on the queues and said they are moving well. At this time, the airport customer service staff are prioritising queues in the order of scheduled flight times.

“What we’re saying to passengers is to continue to arrive as close as possible to two hours before your flight. Don’t arrive any earlier or any later because some airlines will not open check-in before then,” said the Sydeny Airport spokesperson.

A spokesperson from Virgin Australia stated that the airline is expecting to see numbers around 20% higher this weekend than the same period in 2019. With over 1800 flights in four days on the domestic network, A virgin Australia flight will effectively be taking off every 3 minutes and 12 seconds. Cancellations are not expected to provide the airline with any respite either, with only ten cancellations across Virgin’s entire network on Friday.

We Wanted Normality, So Why Can’t Airports Cope With It?

The crowds are back, and so are Sydney Airport’s capacity issues. Despite cries for normality to return to Australian aviation during an unprecedented two years of disruptions, Sydney Airport was already at capacity before Covid19 came along. With an average of 44 million passengers passing through the airport a year, we are still some way behind the average of 150,000 people visiting the airport daily. So why is Australia’s busiest and one of the world’s longest continuously operated commercial airports struggling to cope with just 80,000 passengers per day?

The answer lies within the impact of the pandemic. Qantas, among other major airlines, stood down thousands of staff, from baggage handlers to customer service and long-serving pilots. Australia’s second-biggest airline, Virgin Australia, slipped into administration during the pandemic and let go several thousand staff. Even Sydney Airport was forced to let go of thousands of essential staff to make budget cuts. With passenger numbers returning to near-normal levels, many airlines and airports around Australia and the world face a similar issue. Understaffing.

However, a new argument has cropped up in aviation circles. Should airlines be operating at 100% capacity while significantly understaffed? Many customers flying over the Easter bank holiday pointed out that airlines sell the seats, so they should be prepared to deal with the numbers as they know what to expect. One holidaymaker commented, “it’s not like we’re turning up out of the blue wanting to jump on a flight. We booked these flights weeks, if not months in advance”.

As black and white as the issue sounds, it’s not that simple. With Covid19 throwing businesses all kinds of curve balls in the last two years, the aviation industry has arguably been served the worst hand. Various close-contact regulations and the fact that Covid19 is still transmitting at an alarming rate in New South Wales have led to airport staff being sporadically available for work. For the few remaining staff members, contracting or being considered a close contact of someone with Covid19 could force staff into isolation for up to seven days. Given the nature of airport work, this has meant that many airlines and operational teams have been left with a revolving door of eligible staff since the reopening of international air travel in Australia.

Sydney Airport Is Hiring Frantically: This Is How You Get In On The Action

Despite heavy recruitment across a wide range of roles when Australian borders reopened, Sydney Airport’s chief executive told news.com.au that around 5000 rolls still need to be filled.

“Our security contractor and ground handlers have been advertising jobs since December and have brought 500 staff on-board since the start of the year, but they have another 1200 roles to go which is incredibly challenging in this market,” Geoff Culbert said in an interview.

After some 15,000 staff at Sydney Airport were let go during the pandemic, Sydney Airport has launched a new campaign to entice new and experienced workers to join the aviation industry.

Employers at #SydneyAirport are urgently recruiting for thousands of jobs in security, baggage handling, government agencies, airlines, hospitality and retail.

The job fair is set to advertise up to 5000 roles in various aspects of the airport’s day-to-day operations. Sydney Airport said on Twitter that roles include airport security, baggage handling, government agencies, airlines, hospitality and retail. In other words, there’s a job for everyone, from aviation newcomers to experienced aviation professionals. The job fair will run between 10am and 4pm on June 16th at Sydney Airport T1 International Terminal, Level 3 Mezzanine. Around 800 businesses will be hiring, with some ready to offer candidates a job on the spot. If you have ever dreamed of working in aviation, there is no better place to start. For more details on the job fair, click here.

Big names confirmed to be attending include the Australian Border Force, Certis Security Australia, Dnata, Europcar, Gate Gourmet, Jet Aviation, REX Airlines, Swissport and WHSmith. It’s worth remembering that due to NSW Health regulations, face masks will need to be worn at the event.
Unable to attend or not ready to join Australia’s aviation workforce yet? Well, there’s some good news! Sydney Aiport won’t be the only major employer of aviation professionals in Sydney soon, as Western Sydney Airport is starting to take shape and is well on track for completion in 2026! The new airport, set to alleviate overflow traffic and provide a new hub for budget airlines in Western Sydney, will employ thousands in the coming years, with impressive plans to continue expanding right through until 2060.
8 Shares:
Share 8
Tweet 0
Pin it 0

Read Article
A boy has been injured after he was blasted almost 10 metres through the air by the engine…
Read Article
According to reports in the media, things are moving very fast at Air India as the airline is…