On the 24th of September, 5 flights operating in Narita International Airport were delayed due to an unexpected guest taking a morning stroll on the active runway. This incident was reported at around 11.30am when the pilot of a flight about to take-off spotted a tortoise on the active runway. Narita International Airport Corp. decided to close the active runway for 12 minutes for the airport staff to rescue the wandering reptile and a total of 5 departing flights were delayed for approximately 15 minutes. The captured tortoise was reported to weigh 2.1kg and was about 30cm in length and is currently in the care of the Narita Airport International Corp. until they decide what to do with it. Despite the disruption, the cabin crew on one of the delayed flights reported that their passengers were not particularly concerned about the delay and took off with a rather cheerful demeanor after being informed about the cause of the delay. 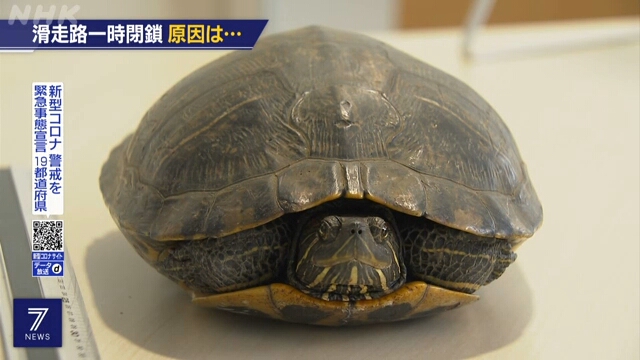 The rescued tortoise in the hands of the Narita Airport Corp. ©nhk.or.jp

We all know that a bird strike could potentially result in a catastrophic accident, with US Airways flight 1549 landing in the Hudson River being the most famous accident in recent years. Non-avian animals on the runway, however, could also cost millions of dollars in damages. According to a paper published by the United States Department of Agriculture back in 2005, the average number of the reported strikes of terrestrial animals was about 100 per year, and about 56% of the aircrafts were destroyed with most of the aircrafts being GA aircrafts. While the yearly average number of tortoise-strike was about 5, only 1 accident over the course of 13 years resulted in a destroyed aircraft. This leads to the next question, is it worth closing the runway of the busiest airport in Japan to save a sunbathing animal?

Coincidently, among the 5 delayed aircrafts was an Airbus 380 with a special livery of a Hawaiian-styled green turtle painted on its fuselage to endear the sacred green turtles in Honolulu. While it must have been an unforgettable moment to be delayed by a tortoise flying in a turtle-themed A380, it would cost the airlines thousands of dollars for even a 15-minute delay with all 4 of the engines running on the A380. The fuel burn of 4 engines running idle can cost up to USD1000 while operating the A380 and all four engines are typically turned on before take-off to warm up. Luckily, the flights were all departing traffic as it would cost up to USD10,000 for an A380 to execute a go-around. To execute a go-around, the aircraft will need to climb back up to a safe altitude and rejoin the approach to land, which would take around 15 minutes in the air with much higher fuel consumption rates.

So What If the Pilots Didn’t See the Tortoise?

The reported weather on the date indicates high visibility, if the pilots continued to take off without seeing an animal on the runway it could potentially lead to a devastating outcome. Due to the high thrust power setting at take-off, a large amount of air is sucked into the compressors of the engines. The suction generated can be strong enough to pull the animal into the engines and result in an engine fire, which typically means a total loss of an engine. The unit price of an engine ranges from around 9 million for the A320 to 13 million for the A380 and that takes no account other damages to the aircraft, airport, and most importantly, the safety of passengers.

Emirates Ready To Restart Flights To Gatwick From...