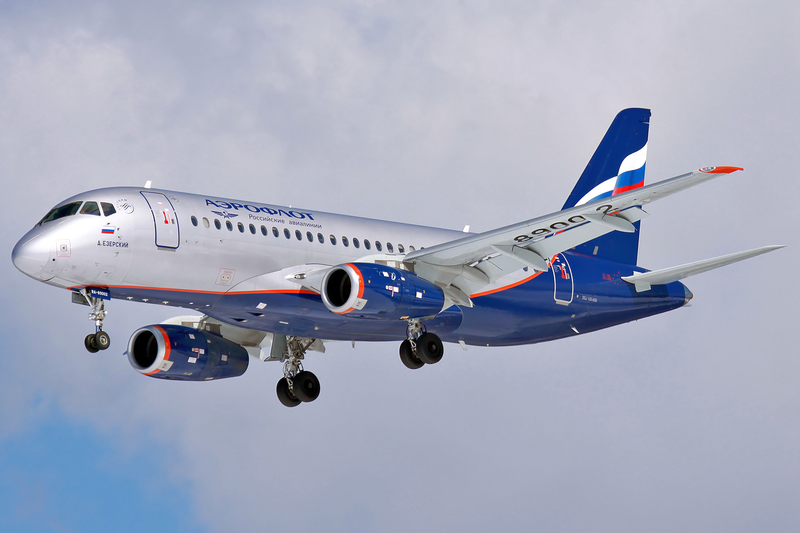 The Sukhoi Design Bureau (OKB-51, abbreviation Su) was founded by Pavel Sukhoi in 1939, as a result of a requirement from Joseph Stalin to establish the production of a reconnaissance and light bomber, the BB-1, later renamed the Su-2.

Sukhoi continued the design and production of military aircraft throughout the second world and cold wars. Today it’s perhaps best known for the front line Su-30 multirole and highly manoeuvrable fighter, known in the West as the ‘Flanker’.

In the 1990s began to diversify into civilian aircraft and in ’96 merged with other well-known Russian manufacturers Mikoyan, Tupolev, Ilyushin and Yakovlev as the United Aircraft Corporation.

In September 2007 Sukhoi launched its first modern commercial regional airliner, the SuperJet 100, (SSJ-100) a 78-98-seater whose maiden flight was in May 2008 and which entered service with Armavia, the now-defunct Armenian carrier.

The SSJ100 has a maximum take-off weight of 49 tons and is powered by two 79 kN SaM turbofans jointly developed by the Russian NPO Saturn and the French Safran. In the standard model the range is 3000 km and 4500 km for the extended variant with a cruise of M0.78. Later participation in the aircraft project included Boeing, Thales, Dowty and Liebherr amongst many others.

On paper at least, the Sukhoi seemed like a viable proposition with hundreds of orders expected from Russian and former-Soviet state carriers, and even Alitalia to compete with other regional jet offers from Embraer and Bombardier.

However despite much promise and being a beacon of hope and pride for the Russian state, the aircraft has been plagued by numerous issues.  The initial project costs escalated to $2 billion, a litany of malfunctions, delays, defective parts and engine shortages dissuaded potential buyers. Its champion, no less than Vladimir Putin, lost interest and foreign participation dwindled to nothing. The high foreign content (claimed to be as much as 80%) caused unfavourable political comment. In May 2012 during a demonstration flight in Indonesia, the SSJ crashed into a mountain, killing 45 people.

Finally, in May 2019 an Aeroflot SSJ en route to Murmansk declared an emergency and returned to Moscow after 30 minutes. It made a hard landing with almost-full tanks, burst into flames, and the resultant fire claiming the lives of 41 of the 78 people on board. The fatal crash spelled the end for the SSJ project, at least in the current form.

There’s no doubt that a healthy market remains, at least within the Russian sphere of influence and especially if the local content can be increased.

But a Russian renaissance? Unlikely.

Read Article
As demand for air travel continues to rise post-pandemic, Turkish Airlines is close to ordering 30 aircraft to…
Read Article
A FedEx Boeing 767 was operating a cargo flight from Newark to Los Angeles. When the aircraft was…