A Royal Air Force Chinook helicopter has made an emergency landing in Carmarthenshire, Wales.

The US Ministry of Defence reported that the incident happened on Tuesday evening near Llangynin with the crew suffering “minor injuries”. 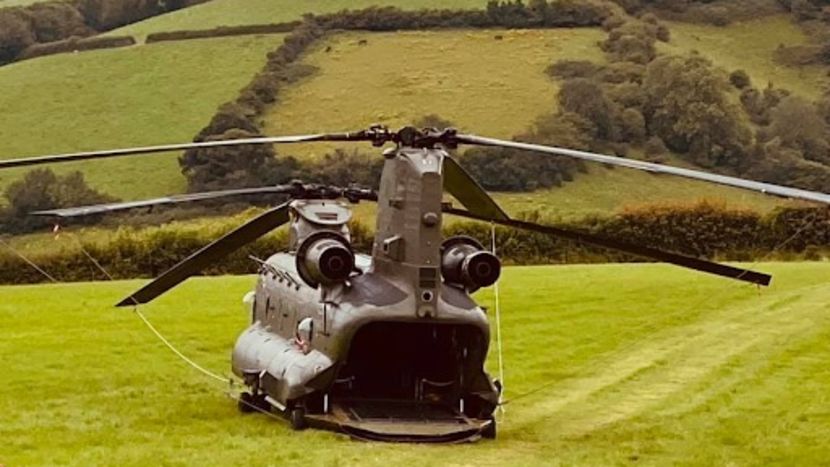 RAF Chinook sits alone after emergency landing in a field

How did it crash?

The Chinook supposedly hit power lines according to local residents who heard the helicopter make contact with the wires. The electricity went off and residents rushed to their doorsteps when they heard a ‘blaring’ noise.

One very lucky #CH47 #Chinook crew from the @RoyalAirForce pic.twitter.com/UMDFOLG8kZ

A picture was posted on social media showing the extent of the damage caused. The picture shows damage from three power cables which hit simultaneously. The damage looks to have severly damaged the cockpit windows and the nose of the aircraft.

What did locals think when it happened?

We went outside, and we could see the Chinook very low, just passing over the village heading towards fields in the distance. My son, Alex, and I jumped into his vehicle and headed down there in case of any injuries or anything.  Luckily, they had landed very safely in a field just a few minutes from the village but unfortunate as they had come down, they had hit some sort of electric overhead cables.   We were first on the scene and we spoke to one of the crew members. They were very shaken and shocked but all okay as far as we can see.

The Chinook is described as an extremely capable and highly versatile support helicopter that can be operated from land or sea bases into a range of diverse environments, from the Arctic to the desert or jungle.

Military chiefs said the Chinook was on a training exercise at the time of the incident.

Some crew members remained with the vehicle overnight to maintain its security and others were said to have stayed at a nearby hotel.

As of midday on Wednesday, July 29, the aircraft had not been recovered but a number of emergency services as well as the RAF Mountain Rescue remained at the site.

Jason is our Assistant Editor here at Travel Radar. Jason has experience in the aviation industry and has been a keen AvGeek for many years. Outside of Travel Radar, Jason works in within the leisure industry managing a high performing leisure centre in the UK.

Boeing to Slash Its Rate of Production