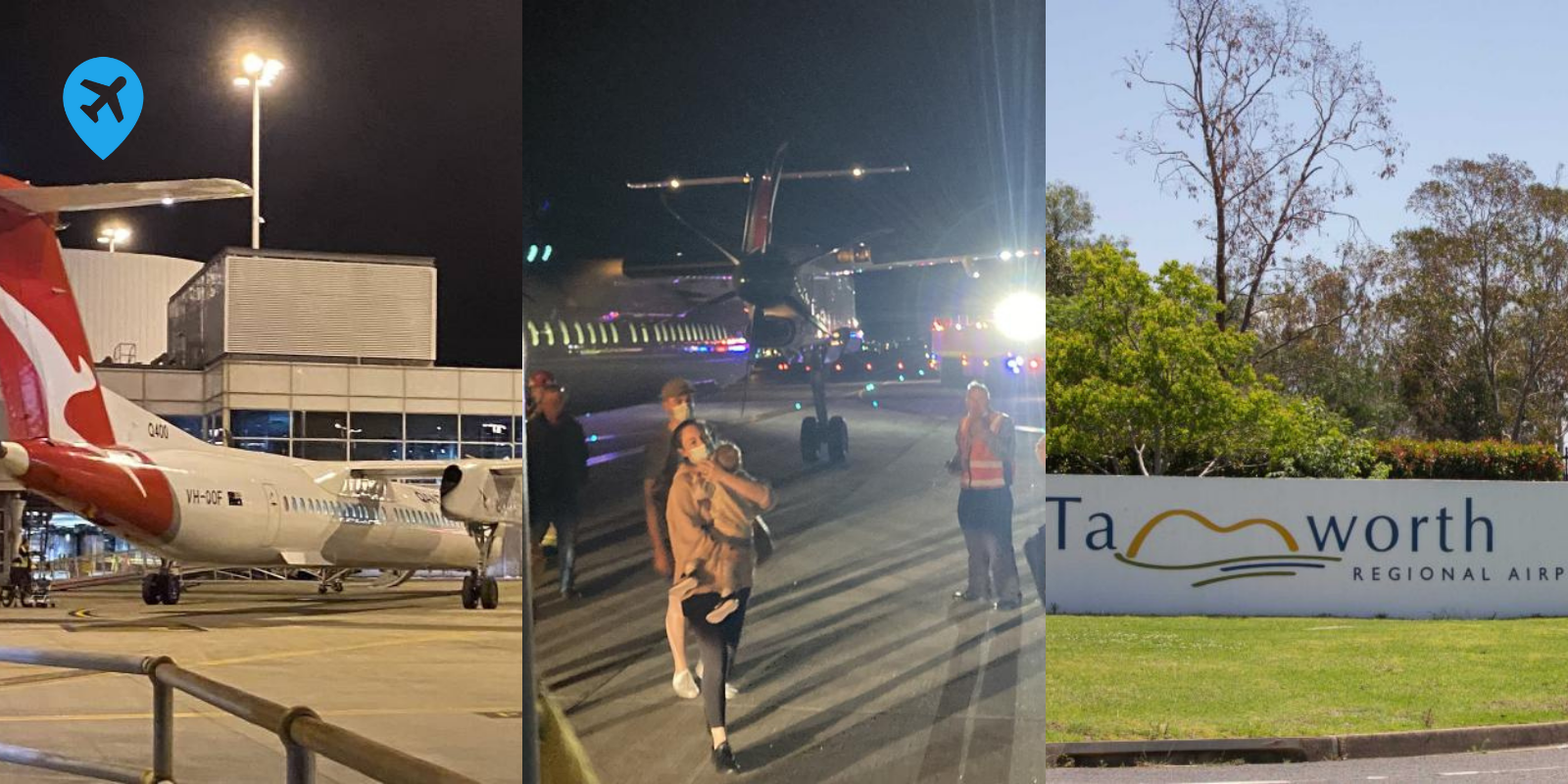 A scheduled routine regional flight from Sydney back to the northeast New South Wales city of Tamworth turned into a terrifying and frantic situation for those onboard. The regular Qantas service, connecting Tamworth to the state capital of Sydney, departed as usual on Sunday evening before pilots notified passengers and crew of a potentially critical problem.

Passengers aboard the Bombardier Dash 8 Q400 series aircraft were instructed to brace after a warning light linked to the plane’s hydraulics system came on. People on board the flight described flight attendants demonstrating the brace position while others feared for their lives after being told that the plane might not stop on the runway. Jesse, a passenger on board the troubled flight, told The Daily Telegraph about the ordeal.

I was literally expecting to belly dump without landing gear at Sydney airport so had sent out a couple of last messages to people. The lady beside me had done the same.

The flight in question was the routine Sydney to Tamworth Qantas Link QF2008 flight leaving Sydney Airport at 7:05pm on May 29th. The flight, which normally lasts around one hour, never made it to Tamworth. Instead, the pilot took the decision to return to Sydney Airport after discovering a potentially serious issue with the plane’s hydraulics. Once the warning light came up on the cockpit’s dashboard, the pilot had to make a hard but essential decision. If there was an issue with the landing gear, something that is controlled by hydraulics, then the plane could overshoot the runway or fail to land safely altogether. However, it’s unclear if the pilot knew what the hydraulic issue was.

Taking no risks, the pilot stuck to his guns and announced to passengers onboard that they would be returning to Sydney tonight due to a potential issue with the aircraft hydraulics. Passengers recall the first officer comforting them by reminding passengers they would be landing on one of Australia’s longest runways giving the aircraft ample space to touch down safely.

Was there an issue with the landing gear?

One of the main reasons the Qantas Link pilot turned back to Sydney was due to the possibility of a faulty landing gear. Simply put, hydraulics are responsible for multiple vital functions on an aircraft. These range from responsibilities such as the brakes, flaps, thrust reversers, flight controls, and of course, the landing gear. If there is an issue with any of these functions, the aircraft and all of its passengers could be in severe danger.

As part of any risk assessment, the pilot always has to assume the worst-case scenario and perform the necessary actions to safeguard their passengers. With no clarity on what the issue was, the pilot made an executive decision to land the plane at its origin. Sydney Airport has two runways, one 3,962 metres long, and the parallel runway is 2,438 metres long, making them among the longest paved runways in Australia. If there was an issue with the landing gear, it would provide the aircraft with ample time to reduce its speed and come to a stop.

Were passengers ever at any risk?

Qantas released a statement refuting any claim that the pilots said the plane might not land on the runway.

Passengers were informed that the aircraft may need to be towed to the gate after landing due to the hydraulic issue. At no point was the aircraft at risk of not stopping on the runway, said a spokesperson for Qantas.

We understand this would have been a very unsettling experience for our passengers and sincerely thank them for their cooperation throughout the flight.

With Qantas claiming that there was never any risk of the plane not landing on the runway, it begs an important question. What went wrong?

Qantas Engineers confirmed that there wasn’t an issue with the hydraulics or hydraulic fluids as suggested. Instead, it was a faulty warning light. Nonetheless, it led to panic and hysteria, which could have been avoided.

Passengers aboard a @Qantas flight to Tamworth sent farewell messages to loved ones after being warned their aircraft had a mechanical problem and might overshoot the runway. It was diverted to Sydney and landed safely. https://t.co/OF81oZXOfr #Qantas #7NEWS pic.twitter.com/0nK8QkPZG6

It’s unclear whether passengers were told that the plane could overshoot the runway, and it’s unclear why this was a concern for passengers if the Qantas pilot or crew members did not inform passengers of this possible scenario. What we do know is that crew members demonstrated the brace position before landing, suggesting they were preparing passengers for the worst outcome, contradicting Qantas’s statement refuting the idea the plane was at risk of an unsafe landing.

No matter how the word got out, arguably more should have been done to comfort the passengers who were understandably left “praying” for their lives. Thankfully, all 69 passengers and crew on board landed safely in Sydney. Qantas put the passengers up for the night in nearby hotels while flying them out to Tamworth on Monday morning.

Qantas has an impeccable safety record and has long been among the safest airlines in the world. In pop culture, Qantas got publicity money can’t buy after featuring the in the film rainman. Dustin Hoffman’s character woudn’t get on a flight unless it was a Qantas flight because “Qantas never crashes”. While not strictly true, it’s not too far from the truth. The flying kangaroo has not suffered a fatal crash since 1951, giving the airline one of the best safety records in modern aviation.

Read Article
Lufthansa has shared its second-quarter results and has become the latest airline to share its positive progress with…
Read Article
The UK government announced an update to its travel lists on 14th July, with countries like Hong Kong…