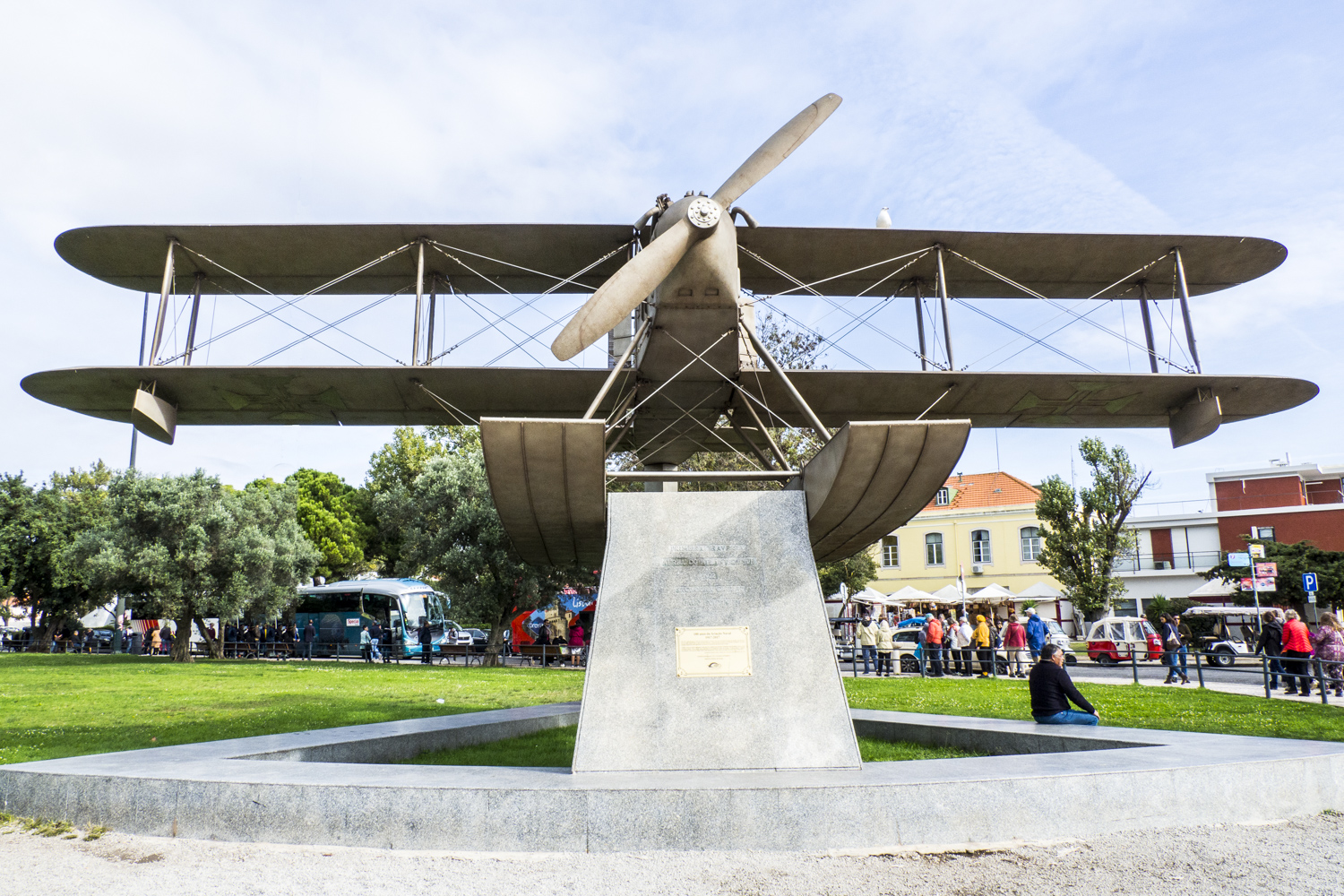 Belem is a district of Lisbon, the capital of Portugal.  Unlike the other areas, perched on one of its seven hills, it straddles the plain between the River Tagus and its meeting with the Atlantic Ocean.  The long, wide promenade features some unusual monuments to Portuguese explorers and adventurers.  These include a full-size replica of the bi-plane, the Santa Cruz, a memorial to a great Portuguese adventurer, Gago Coutinho.

Memorial to Gago Coutinho in Belem a District of Lisbon

In 1922 Gago Coutinho and Sacadura Cabral were the first pilots to fly across the South Atlantic Ocean.  However, they had to make fuel stops on the way.  Their flight from Lisbon to Rio de Janeiro, a distance of 8,400 kilometres, took them 79 days.  But, it nearly ended in disaster when the engine failed due to bad weather along the Brazilian coast.  It meant they had to ditch into the Pacific Ocean.  The support boat sent out a distress signal, and a British freighter found them.  Desperate to complete their epic journey, they negotiated the loan of a new aircraft from the British and completed their mission.

Coutinho also invented the sextant with two spirit levels that allowed navigation without using the real horizon.  It is useful when flying in poor visibility.  A cluster of Portuguese explorers is also celebrated on this promenade by the Monument to the Discoveries.

Monument to the Discoveries in Belem, Lisbon

This striking Monument represents the prow of a caravel, the ships Portuguese explorers set sail in during the sixteenth century.  And many of them did as evidenced by the number of statues strung along this prow.  It commemorates the 500th anniversary of the death of Henry the Navigator, the man who started it all.  They all look out to sea but, if they looked to their right, they would see the splendid Torre de Belem.

This ornate, distinctively shaped fortress w was as built in the sixteenth century to defend the estuary of the River Targus.  Its unique stonework exterior with its ornate balconies and Moorish style sentry posts has resulted in UNESCO world heritage status.  Surplus Lioz limestone stone blocks from the magnificent Mosteiro dos Jerónimos that was taking shape during the same period were used to build it.

This immense and ornate Hieronymite Monastery took almost one hundred years to build. Created in the Manueline style which reflects the prosperity of the Portuguese kingdom at the time.  Vasco da Gama, the famous explorer, and Luís de Camões, the epic poet, are buried here.

A final treat in Belem has to be a Pastéis de Belém.  This delicious little custard tart originates from here.

Article by Valery Collins the Experienced Traveller.  You may also like to read about the French pioneer Saint-Exupéry.

Emirates Resumes Flights to 9 cities including London, Frankfurt and Sydney

Zombie Air, or When Tragedy Turns to Farce

Read Article
Many commercial airlines have suffered drastically during the pandemic but how has the pandemic impacted boutique airlines? What…
The low-cost US carrier Southwest Airlines has topped the 2020 annual JD Power survey for airline satisfaction for…