A Look at Ground Service Equipment: The Airport Pit-Stop

Previously, we mentioned that airlines try to make every task as short as possible on ground operation in order to reduce cost on ground. This complex and diverse set of activities are expertly coordinated by a professional members and of the right equipment to keep the job done in this demanding environment. We are going to introduce some common type of ground service equipment getting your flights safe, and on-time.

Refuelling is one of the most important tasks in a turnaround operation. Aircraft will be refuelled to the requirements by the captain or, by the ramp officer. Procedures are in place for a self-contained fuel truck, or a hydrant truck or cart. In major airports, an underground central pipeline network has been designed for hydrant cart or trucks to extract fuel and pump directly into aircrafts. There is a significant advantage compared to contained fuel trucks. However, a designated parking position is required in order to maintain space for connecting to the aircraft’s refuelling port, under the wings and to the fuel hydrants.

Container loaders, also known as cargo loaders are used for the loading and unloading of containers into and out of aircraft. The loader has two platforms which raise and descend independently. The containers or pallets on the loader are moved with the help of built-in rollers or wheels. There are different container and pallet loaders to entertain the different requirement of aircraft, from a lowest 3.5 and 7 tonnes for lower deck cargo on a narrow bodies aircraft, to the main deck loading for a 747-8F with 14 & 30 Tonnes. Some airports use airborne loaders, which are transportable from the cargo warehouse and the apron, preventing the transitions between dollies and towing tractors. Most of the equipment is mainly produced in Europe, China, and the United States and imported to the country of operations – just like any other purchase!

Belt loaders are conveyor belts for unloading and loading on to aircraft. A belt loader is positioned forward and aft hold baggage compartment forward and bulk hold of wide body aircraft. during operation. The belt loaders are used mostly in services and the cargo & baggage without containers is called as bulk loading. 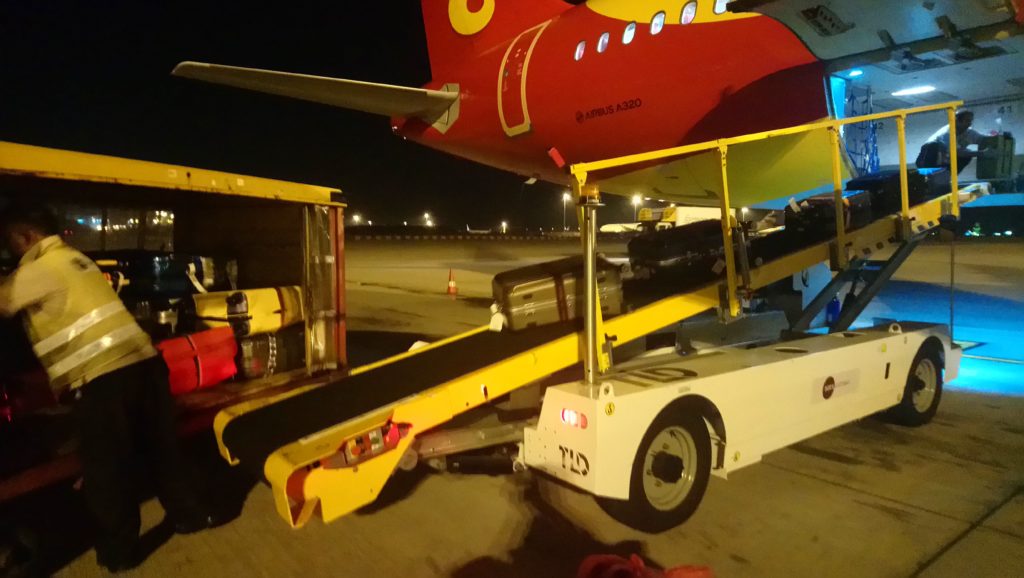 Dollies are standard sized equipment with wheels, roller bars or ball mats on the surface for reducing friction during loading and unloading process. Hinge/locks are also equipped for to secure the position of the ULD/pallet on them during transportation. The aviation industry adopted ULD/pallets have dimensional standard following the aircraft cargo bay dimension. Therefore, these dollies are custom designed to complement the ULD/pallet’s dimension. Some dollies have a rotational base to facilitate changing orientation of the cargo during loading/ unloading. The precise movement is required to align the center of gravity of the dollies. Mechanical brakes are also equipped for locking dolly wheels when idle, which preventing slipping during long idling time at apron.

We hope you enjoy the short introduction of the gears used in the apron. We will cover more stories of equipment and procedures related to ground services next week. Let us know what you would like featured in this series in the comments below!