A police officer has been arrested after attempting to smuggle 185 turtles from the Galapagos Islands to Guayaqui in mainland Ecuador. The newborn turtles were discovered inside a suitcase at Baltra Island’s main airport, Galápagos Ecological Airport, during a cargo inspection on Sunday.

In a statement, it was revealed that policeman Nixon Alejandro was arrested on Monday afternoon for his alleged responsibility in the act. The Office of the Prosecutor has announced that he will be charged with the crime against Wild Flora and Fauna, which is punishable by a custodial sentence of up to three years. 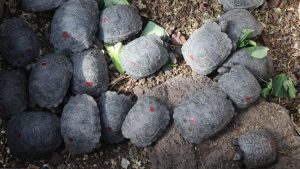 Wild Flora and Fauna is an international agreement between governments to ensure that international trade in specimens of wild animals and plants does not threaten the survival of the species.

Washington Tapia, a consultant scientist for the Galapagos Conservancy, said: ”The Galapagos giant tortoises are endemic species, unique in the world. They are a fundamental part of the trophic chain of their ecosystems, they are dispensers of seeds, with their movements they mold the ecosystem, creating better conditions for plants, animals or other species to develop.”

Autopsy to be carried out

Ten of the newborns were found dead after airport workers discovered the neonatal giant turtles wrapped in plastic inside a suitcase. Immediately after the discovery, The Public Prosecutor’s Office, the National Environmental Protection Police Unit and the corresponding investigation teams were alerted.

The Ministry of the Environment and Water has since said autopsies will be performed to determine with certainty the cause of death.

Marcelo Mata, Minister of the Environment said: “There will be no contemplation with these people who do so much harm to society, the environment, health, and the modesty of ecology.”

Danny Rueda, director of the Galapagos National Park, added: “The expertise of the park rangers in reviewing the cargo and luggage that leaves both air and sea has prevented this and other cases of species trafficking from taking place.”

The investigation remains open and the environmental authority is promoting all legal actions so the alleged crime is punished appropriately.

Do you think three years in prison is an acceptable length of time for this crime? Let us know below.

Why You Should Choose The Worst Seat On The Plane