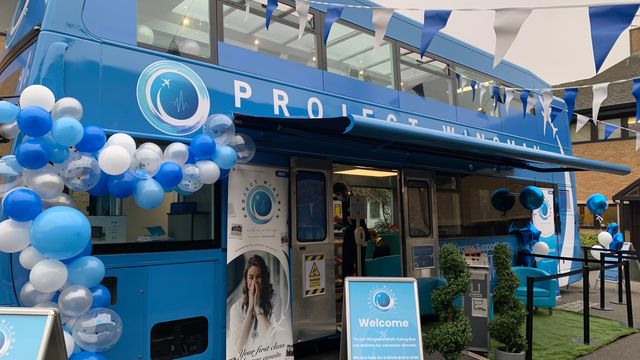 The worldwide pandemic brought commercial air travel to a sudden and abrupt halt. When planes were grounded and thousands of people within the aviation sector unexpectedly found themselves furloughed or made redundant. When Captain Emma Henderson and Captain David Fielding found themselves furloughed, the two Pilots wanted to do something to help support NHS staff during this challenging time.

The ‘Project Wingman’ scheme was created to recruit over 5,000 volunteers from the aviation industry whose jobs had been affected by the pandemic. With the skills to hand and time available, the volunteers felt a tremendous sense of empathy for the NHS staff. Aircrew often have to undergo regular training to ensure the safety of all passengers on board, and are sometimes required to provide basic medical assistance, often during high pressure situations.  This shared experience ensured the volunteers were fully prepared to be on hand to help support medical staff in need of a smile and a friendly ear to listen.

“First class lounges” were set up at over 70 hospitals across the UK, creating an on-site space for exhausted staff to unwind, de-stress and enjoy a pamper before, during and after hospital shifts.

Captain Emma Henderson commented: “Like many others I just want to give back to the NHS at this critical time and the aim is to do what we can to support those at forefront of dealing with this health emergency. Since NHS workers give first class treatment to their patients, our ‘First Class Lounges’ are our way of giving NHS staff the treatment they deserve”.

“Medical staff need to talk about their job with people who can empathise with the pressures involved. Whether it’s talking to a cabin crew member about their travels, or being handed a cup of tea by a pilot, our uniformed and dedicated airline crew are putting smiles on the faces of NHS workers across the country.”

The luxury lounges were first set up at Maidstone and Tunbridge Wells hospitals back in May 2020. All of the lounges are ran by aircrew volunteers from several airlines including easyJet, Virgin, Norwegian and SAS.

British Airways pilot and captain, Dave Fielding said: “The “tea and empathy” scheme has proved to be very popular with hospitals. Since first opening, more and more hospitals have continued to implement first-class lounges on-site due to the positive well-being factors and support this initiative has given to NHS staff under tremendous amounts of pressure.”

In recognition for the successful collaboration between airline crew and medical staff, Emma Henderson was awarded an MBE for her service in support of well-being for NHS staff! The generosity of the Project Wingman volunteers who have given up their time to help, despite facing their own challenges and uncertainties within the airline industry has also been widely recognised.

Henderson commented: “I am delighted, honoured, and to be honest, completely humbled to be receiving an award recognising the work that ‘Project Wingman’ has done. The biggest reward has been seeing the massive difference our volunteers have made to the lives of NHS workers across the country, and I am so proud of our industry for pulling together and being wiling to help in the face of such immensely difficult times. This award really belongs to the 5,500 volunteers who have made this happen and helped ‘Project Wingman’ to go beyond our wildest dreams. Thank you for the recognition you are giving to my small part in this.”

One other benefit to come out of the collaboration is that it has given both air crew and medical staff the chance to share their personal experiences for how to best take care of people and the opportunity to participate in clinical simulation exercises to improve patient safety, whether that’s in a hospital or onboard a plane.

The pandemic has forced the aviation industry to adapt in many unique and innovative ways. Recently, Air France allowed designer, Pierre Balmain to use its unused aviation space to host a fashion show during Paris Fashion Week in an effort to support the French fashion industry which had taken an adverse hit during the crisis. It will be exciting to see what other initiatives the aviation industry will use to support other sectors in the months of recovery that follow as we work towards a return to normal.

Project Wingman has launched a fundraising initiative to raise further funds to support NHS workers and create more mobile lounges at other hospital sites. If you are interested in donating, visit Brighter Futures. For more information on Project Wingman, visit www.projectwingman.co.uk.

What do you think of the Project Wingman’s Airbus to Care Bus initiative to support NHS staff? Let us know in the comments section below.

85 Years of Aer Lingus: A Look at the Airline's Success Over the Years