The F-16 Fighting Falcon is ‘arguably’ the most iconic and successful 4th generation supersonic jet to pierce the skies. To this day, it is trusted and used by numerous air forces around the globe as a multi-role combat aircraft. 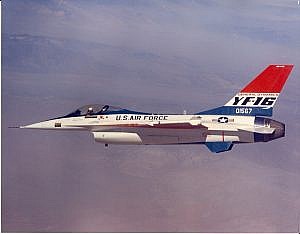 The F-16 was pioneered in the early ‘70s by a group of engineers and defense analysts in the US, nicknamed ‘Fighter Mafia’. They wanted to develop a lightweight fighter jet that could maneuver with minimal energy loss. Consequently, a team of General Aviation engineers, led by Robert H. Widmer began working on this ambitious project. Their final product was the YF-16 prototype that was unveiled on December 13th, 1973. Soon this prototype was adopted for full-scale production after a few alterations to its design.

Operation Desert Storm of 1991 was a true test to the fighter jet’s full combat abilities. The US air force extensively used it both air-to-air and air-to-surface mission that demonstrated its air superiority.

Underneath the F-16’s -mostly aluminum alloy- body rests the powerful General Electric F-110 engine, capable of producing more than 29,000 lbs of thrust (latest block model). It can propel the plane to speeds of up to 1500 mph (+Mach 2).

Here is a video showing the engine running at full-thrust:

As for aerodynamics, it was intentionally set up to have ‘negative stability’. While unconventional for most aircraft, it gives the F-16 its signature maneuverability.

In line with its multi-purpose role, the Block 70/72 model is equipped with state of the art AESA radar and electronic warfare capabilities. This will make it an appealing choice for SEAD missions. Over the years, the F-16 has undergone several upgrades, resulting in 139 variants of the fighter.

Its ability to traverse the skies at supersonic speeds means it can occasionally be used for the civil cause. For instance, in February, the jet transported an ECMO machine across half of Norway to a hospital in Bodø, thus saving a patient’s life.

The jet’s demand even to this day is a testament to its airworthiness. Lockheed Martin claims that advancements in its structural life -Service Life Extension Program (SLEP) – will allow the F-16 to remain in service till 2060. The Bulgarian Air force is Lockheed Martin’s latest contract with eight F-16 Block 70 orders.

What do you most like about the Flying Falcon?

These are really some great tips to share with us. Thank you very much for this brilliant post. I was looking for learn more about moving a house and a good packer and movers option, and got some really nice information here. Thanks for sharing!! Well, I have visited another site having some wonderful and similar information.

The Coronavirus Effect: Thai Airways Suspends Operations Until May 31