Etihad Airlines has announced that it is indefinitely grounding its entire fleet of A380 aircraft.  As a consequence, this decision could result in uncertainty for the A380’s future.

Etihad Airlines Announces the plan of Indefinite Grounding of Its Entire Fleet of A380s.

The Abu Dhabi Based national carrier of the United Arab Emirates has a fleet of ten A380-800s.  Etihad is one of the early customers to place orders for the world’s first double-decker superjumbo aircraft.

The A380 of Etihad operates to prime destinations like London Heathrow, JFK, among others ©Flight Chic

Etihad Airlines has been procuring the A380-800’s as part of its plan for the long-haul routes.

However,  COVID-19 has become a spoiler in its scheme of things pushing the airline to ground its entire fleet of A380s.  This happened in March 2020.  Since then, the airline could not get its fleet up and fly.

Chief Executive Tony Douglas had told staff its A380s would continue to be parked “indefinitely.”

Job loses are imminent while costs of maintenance will go up.

So, what it means to the airline?  Etihad has already announced that it will issue pink-slips to the crew members shortly. An internal memo to this effect is already in circulation.

About 20 per cent of the 4800 staff is likely to be fired due to this development.  Which means close to 1000 job loses are expected at the Airline.

Pilots are also part of the affected lay-off, it is reliably learnt.

COVID-19 Attributed as the Main Reason for This Business Impact.

COVID-19 has been the main reason coupled with the second wave of attack recently is cited as the reasons for this business impact.  The decision was taken especially after the slower than expected air travel and the medical emergency.  The global aviation business has come to a screeching halt due to COVID-19 pandemic.  Came with it was the near-total shut down of airlines and ground of aircraft. 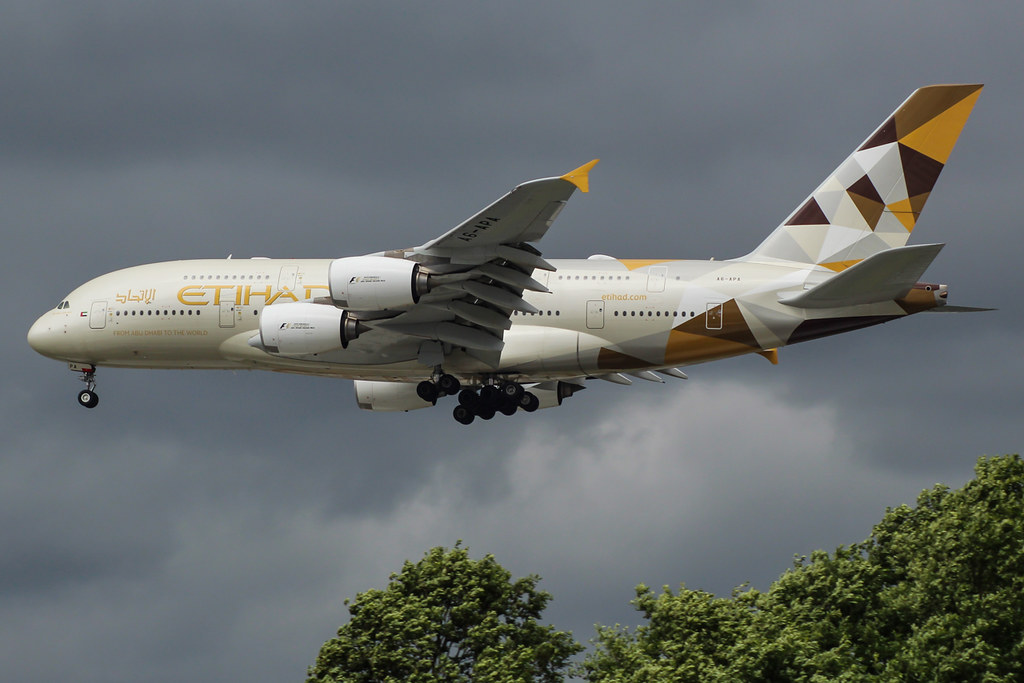 Stormy Skies Ahead for Etihad and the A380.|(C) Mark Harkin via Flickr

Etihad will Become a Down-sized Airline

Etihad already announced its intentions to become mid-sized airlines last week.  This raised concerns about the existing fleet it owns.  Etihad currently has twenty Airbus A320-200s and ten Airbus A321-200s in its fleet.

Its announcement in becoming a mid-sized airline has already sent shock-waves to its employees.  This means a huge chunk of employees being affected.

The growth of Etihad has been impressive over the years.  It grew faster than many other international operators in the long-haul routes.

With this development the future of the Airbus A380 fleet is unknown.

Please let us know your comments on this below!

Qantas Celebrates a Hundred Years in the Skies