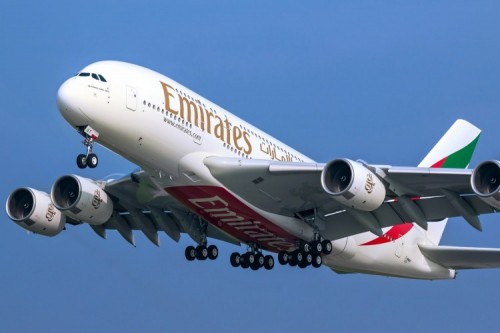 Home Emirates Plans to Decommission 40% of its A380’s

Emirates Plans to Decommission 40% of its A380’s

It’s almost a case of the aircraft that never was. Yesterday we heard that Air France was to permanently axe its nine A380’s after becoming the first European to operate the type just over a decade ago. Early in 2019, the pan-European fleet amounted to 37 in service, but the Air France and Lufthansa plans to downsize amounted to an overall reduction to 28 by 2022. Now the retirement by the French carrier means the European fleet will be just 20. Ultimately it will probably be even fewer.

Also revealed yesterday were the negotiations by Emirates NOT to take delivery of all its remaining superjumbos. The Gulf megacarrier has eight on order (there’s one left for the Japanese ANA) but wants to cancel five of them.

Since this is the end for the Airbus and given there’s no second-hand market for the A380, both buyer and seller are in trouble. Emirates will forfeit the deposits and Airbus will have thousands of new parts and no demand for them.

But that’s yesterday. Today we understand that Emirates wants to permanently decommission 40% of its A380s after grounding all of them in late March; 46 aircraft out of a total of 115. For many years Emirates has operated a fleet of just 777’s and A380’s, albeit it in different variants and configurations.

The A380 was tailor-made for Emirates, which is the biggest operator of the type by a massive margin. The advent of the fuel-efficient Airbus A350 and Boeing 787 allowed ultra-long-range point to point operations, rather than the hub-and-spoke model for which the A380 was designed and which Emirates operates.

While the Emirates announcement comes as a surprise, it amounts only to a confirmation of the early demise of an incredible aircraft which was quickly caught and overtaken by technology.

A final decision will be made by the airline in the next few days.

U.S. Airlines Are Ignoring the Need for Social Distancing by Flying at Capacity

Saint-Omer in France, the First Home of the RAF

Read More
Early on Thursday morning, an Air New Zealand flight originally from Christchurch (CHC) to Guangzhou (CAN) made an…
Read More
Pakistan International Airlines (PIA) has said it’s had to sack 63 employees in the last month, following a…