Imagine sometime in the future you have ‘slipped the surly bonds of earth and danced the skies on laughter-silvered wings‘. You’re on a long-haul—let’s say London to Hong Kong–in economy with the rest of us. And on one of the best airlines in the world.

The service is excellent, supper was great, and there’s no turbulence to speak of. It’s half-past-ten and you’ve watched two of the latest movies and an old favourite. You’ve walked up and down the cabin four times and done a few stretches. What more could you ask for?

Sleep—blissful sleep. But…. unless you’re four feet tall with double-jointed knees, there’s almost no chance. Not properly. Some of us can get one or two hours of napping until the wrist goes to sleep and cramp attacks your calves. But for the majority of us, a decent night’s sleep is just a dream. (ha-ha!)

Sound familiar? Well, in the future, you might not have to sell your car to afford a business-class seat. 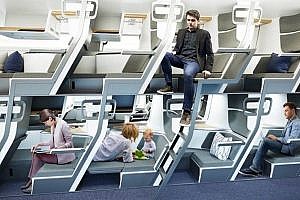 American start-up company Zephyr Aerospace has demonstrated the design of a new airline seat/bed combination called (unsurprisingly) the ‘Zephyr seat’. Not only does it allow everyone in economy to lie flat but also complies with standard social distancing requirements. And no, you won’t need to dive into the cargo hold. So where does the extra space come from? Above your head! (see fig. 1). The overhead bins will need to be removed, and It’s not clear where the carry-on bags will go- presumably in the hold. But that might not be a huge problem given likely new COVID-related restrictions. There are also questions about that ladder and during take-off and landing, but the seats can be retrofitted to existing aircraft, so the design must have potential.

Air New Zealand operates some of the longest flights in the world and is always interested in greater comfort. It looks as if they will begin trialling their ‘Skynest’ concept in 2021. (see fig.2) Modelled on the ‘pod hotel’ accommodation the bunk beds would be 2m long and about 58cm wide and would have a proper pillow, sheets, blankets and a privacy curtain. The idea isn’t quite a lie-flat seat for every economy passenger: ANZ says you’ll need to book and pay—perhaps by the hour—separately from the ticket itself, but it’ll be much cheaper than business class.

Finally, the Delft University of Technology has developed two systems of seating that convert to bunk beds, one where passengers lie aligned down the length of the cabin and the other at right angles to it. (see fig. 3)

The regular seats fold up to construct the beds—rather like bunk beds for children, or the fold-out sleeper beds on better railway carriages. The beds are intended only for use in the cruise and look as if they need a fair degree of cooperation between passengers.

Although all three proposals give new meaning to the phrase ‘packed in like sardines’, they seem to offer a lot more comfort than current seating that hasn’t changed since the beginning of commercial aviation. I for one would choose the airline that offers any of the above options, provided the prices are similar. What about you?