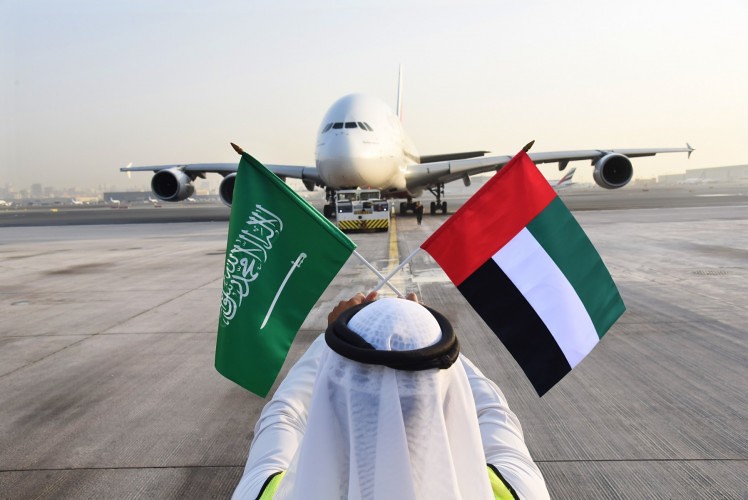 On Monday we reported that Cathay Pacific has grounded half its fleet due to the continuing drop in demand from passengers fearing infection by the coronavirus. Many other airlines in the Far East have suffered similar plummeting demand, as the outbreak continues to spread both in Asia, Europe and the Middle East. Lufthansa, Singapore, EasyJet and a host of other carriers are cutting frequencies, routes and costs.

Now it’s the turn of the giant Emirates.

The Gulf carrier is asking staff to take unpaid leave for up to a month as a result of a ‘measurable slowdown’ in its business. The Chief Operating Officer Adel al-Redha has said, ‘Considering the availability of additional resources and the fact that many employees want to utilize their leave, we have provided our employees the option to avail leave or apply for voluntary unpaid leave for up to one month at a time.’ The airline has cancelled flights to most of mainland China, Iran and Bahrain.

The Emirates Group, consisting of the airline itself, Emirates Holidays, Emirates Tours, dnata, SkyCargo and others, employs more than 100 000 staff including 21 000 cabin crew and 4 000 pilots. Although largely a transit airline through its hub at Dubai, traffic to and from the United Arab Emirates has been badly affected as concerts, events and business gatherings have been cancelled or postponed. Given that the number of transit passengers exceeds 153 000 per day (56 million per year) the risk of transmission at the airport and within the UAE is severe.

Meantime, the global aviation body IATA is asking Middle Eastern governments to support airlines as they grapple with the downturn. Being state-owned, Emirates is not likely to suffer through want of support, but ultimately the travelling public will decide. Until health authorities give the go-ahead, volumes are not likely to pick up soon. But there is cause for optimism; experience with previous epidemics suggest volumes the rebound is as fast as the decline.

And depending on your appetite for risk, there will certainly be some bargains to be had in a few months’ time.

Read Article
With Australia cautiously and gradually lifting restrictions on its borders in November, international travel is on track to…
Read Article
Flight delays are expected to affect the nation throughout Tuesday after Melbourne Airport was forced to go into…