In the latest development of Chinese civil aviation,  a complete recovery is expected to be reached in this month for China’s Domestic Aviation sector. The news come as worldwide decline in passenger-traffic is felt rippling through the industry.

ForwardKyes, an international Analytics organisation which specialises in Aviation, says that the Chinese Civil Aviation Industry will reach its recovery as early as the end of September 2020 – this month.

The research firm says that China has been steadily recovering in the Post COVID-19 era and a full recovery is expected this month itself.

Citing domestic arrivals at 86% and ticket bookings (issued) at 98% as compared to 2019 for the same period,  the firm predicts – at least the domestic sector – to reach pre-COVID19 levels once again. The move comes as worldwide traffic passenger numbers have dropped significantly, with many international airlines furloughing and making mass redundancies. 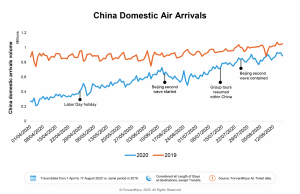 The prediction, which is based on primarily four factors, includes the control of the pandemic, growth of domestic aviation seat capacity by a few percentage points as compared to 2019 figures (5.7%), Flexi fares offering from airlines and the education sector’s imminent opening (schools and colleges) and finally aggressive promotions by airlines are indicators of this trend.

Chinese civil aviation players have come out with several different offers from the beginning of mid-June this year.  These have resulted in a quick & near total recovery in the month of August this year.  And, the full recovery is expected to follow shortly after, this September.

China Southern’s ‘Fly Happily’ promotion is an offering which allows passengers to fly to any destination across the country at just $529.  While the promotion allows passengers to travel before 6 January,  HNA, another airline offers its passengers tickets to travel for $386 to and from the city of Hainan.  Altogether nine airlines have come out with such promotions.  The ‘Students fly’ promotion by Xiamen Airlines is attracting a good amount of first-year university students who can travel until 25th September just for $40. 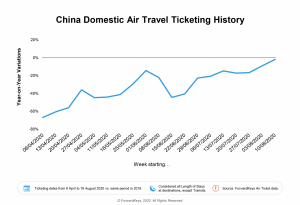 It is interesting to look at the steady recovery of the Chinese Civil Aviation market data since the Second Week of February this year.

Three important indicators namely the Labour Day holiday at the beginning of May, resumption of group tours within China in mid-July and the containment of Beijing’s second wave of COVID-19 again in mid-July are considered as recovery points.  The recovery could have been achieved a little earlier than the current prediction had Beijing’s second COVID-19 outbreak was avoided in the second week of June, the forward keys report says.  However,  the 20th August announcement by the Beijing Centre for Disease Prevention and Control, that people in Beijing need not wear a mask in public added to the positive trend in domestic air travel, as the public became reassured of the pandemic’s control and prevalence.

With the Chinese Domestic Civil aviation industry expected to reach normalcy,  all airlines across the globe will be eagerly watching to this recovery and looking forward to their recovery to their respective markets. What are your thoughts? Is global aviation set to recover sooner than expected? Let us know in the comments below.

Interesting read. Airlines need to definitely reassure the safety and sanity of their carriers, which is the only way for them to bring in flyers after the storm.

Hope airlines industry recovers earlier than expected. This can be achieved by airlines encouraging, to book open tickets and also tieup with govt and private tourism and promote attractive travel packages .

Once again that you for this useful . well researched article by the author Radhakrishnan Pattabiraman

British Airways to Fly Direct from London to Lahore