Chinese Aviation Market is Recovering after lifting of COVID-19 Restrictions

Months after restrictions were lifted in Wuhan, optimistic signs are appearing for the domestic aviation market in China. Just last week when the lockdown was lifted in Beijing, allowing airlines to operate to low-risk cities, positive sentiments are echoing across China.

Now with China reopening their aviation market, airlines are hoping to make a quick recovery. Global airlines are keenly observing the reopening. As Chinese holiday season starting 1 May took off, airlines added many flights as Beijing relaxed restrictions. In a bid to encourage passengers to travel, airlines slashed fares significantly. To support airlines, the Chinese government subsidised ATF (Aviation Turbine Fuel) price by almost 50 per cent.

In March, domestic aviation market saw a sharp rise in passenger load factor, yields and revenues. Around 6000 daily flights are operating around China, meaning that the carriers are able to restart 50 per cent of their operations. Destinations which are leading the increase in passenger loads are commercial centres like Guangdong, Zhejiang, Shanghai, Sichuan and Yunnan.

With regards to international flights, China is currently allowing one route per country with one flight per week. Although the domestic aviation market comprised more than 60 per cent of passenger revenue last year, restarting international operations will help the industry bounce back faster. An analytics company ForwardKeys believe that the spurt in passenger load domestically solved only half the problem. Allowing international operations would allow tourists to enter the country, 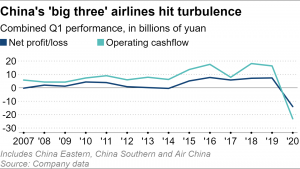 ”Whilst this looks like the emergence of the proverbial ‘green shoots’ of recovery; it is a domestic phenomenon; and Chinese international air traffic is still falling.” said by Olivier Ponti, VP Insights, ForwardKeys

According to Nikkei Asian Review, the three state-owned Chinese airlines reported a loss of $1.98 billion for the first quarter. Despite the losses, the three airlines China Eastern, China Southern and Air China, were able to rake up to $5 billion through bond issuances. Although private-owned airlines are facing an uphill task to sustain financially, the lifting of restrictions will bring in good revenues.