Airport Cinema: Up In The Air

Welcome back to Airport Cinema. In this issue, we look at 2009’s Academy Award nominated film ‘Up In The Air’, or ‘That George Clooney Plane Film’, if you prefer.

The film tells the story of Clooney’s character Ryan Bingham whose job involves him flying across all of America and firing large amounts of people on behalf of companies. Throughout the film, Bingham is aspiring to achieve ten million frequent flyer miles with American Airlines. The film explores the premise of a man who travels for work so much that he spends more time in planes and airports than he does in his own home.

The film is based on the 2001 novel of the same name, which  explores this way of living even further and looks at the idea of the lead character considering planes his home and flight crew members his family.

The filming of Up In The Air took place at many different airports, but predominantly at St Louis Lambert International Airport. St Louis became the location for most of the filming, with 80 different sets being used in over 50 locations in the city. St Louis Airport is also used to portray various other airports all over America. 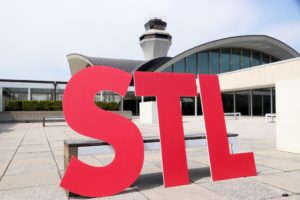 The film crew shot at St Louis Airport for five days, with those days being 20 hours long. We all hate a long wait at an airport, but 100 hours in five days seems excessive.

Filming also took place at Detroit Metropolitan Wayne County Airport, Michigan, the main terminal of Eppley Airfield and the Ontario International Airport. This film is like The Avengers for airports!

The film’s director Jason Reitman discovered the difficulty of filming aerial shots during this film. He set eight days devoted to filming them but found that three days of the footage was unusable. Filming on a plane certainly isn’t as easy as it sounds.

What do you think about the concept of spending more time on planes than at home? Let us know!