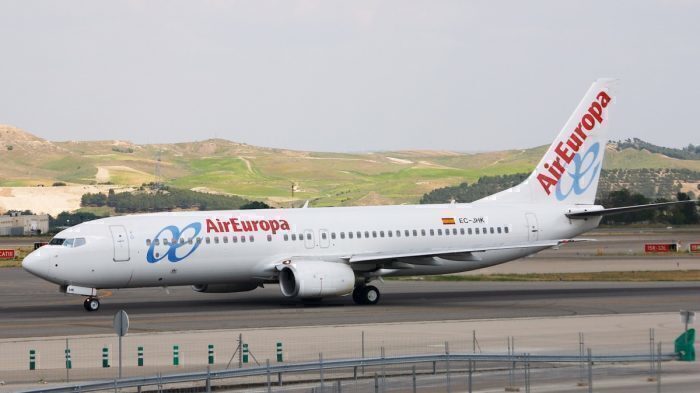 An Air Europa Boeing 737-800 suffered a bird strike while it was climbing out of Paris Orly Airport’s runway 24.

The pilots were handed off to departure and they continued the climb asking for a runway inspection, they weren’t sure whether the bird may have hit their landing gear. The subsequent runway inspection by the airport officials found two dead pigeons on the runway.

Returned back to Paris

When the aircraft was climbing through FL120, the pilots reported engine trouble with the left hand CFM International CFM56. After reporting that the engine was not performing correctly, the crew reduced the engine to idle and returned to Paris Orly.

The aircraft landed safely on Paris Orly runway 25, some 25 minutes after departure. After landing the aircraft was inspected by the officials.

The Air Europa Boeing 737-800 with registration EC-MXM was delivered to the airline back in July 2018 and is currently 2.1 years old.

Air Europa is the third-largest Spanish airline, headquartered in Llucmajor, Mallorca, Spain. The airline has its main hub at Adolfo Suárez Madrid–Barajas Airport.

The airline operates long-haul and short-haul flights to over 44 destinations around Spain, Europe, South America, North America, the Caribbean, Morocco, and Tunisia.

As of June 2020, the airline has a fleet of 61 long and short-haul aircraft with an average age of 8.7 years. However, 13 of them are grounded due to the coronavirus pandemic.

Have you ever experienced a bird strike while being on board the aircraft? Let us know in the comments below:

Read More
Jetstar feels its new Airbus A321LRs will offer greater comfort to its customers. An Upgraded Fleet Jetstar has…
Read More
China Southern Airlines is retiring its fleet of five Airbus A380s. The airline has not formally announced the…