Home » A Major US Partner for Emirates?
AirlinesDestinations

A Major US Partner for Emirates?

You’d think it would make a gigantic amount of economic sense for a tie-up between the big US carriers and their peers in the Gulf. It’s been a rocky road so far; the relationship between the American and Gulf airlines has rarely been a happy one. US airlines have cried foul very loudly because of—as they claim—unfair subsidies of the three mega-carriers from the Gulf states. OK, Qatar Airways has its own set of problems to grapple with and partly because of that has formed a partnership with American. 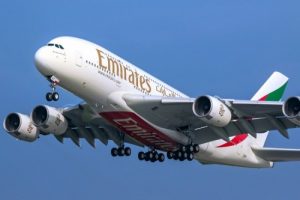 But depending on your perspective, Emirates is the big prize–or threat. Emirates has ten destinations in the US, including New York, Chicago, Los Angeles, and Dallas. You’d think the amount of business that a US carrier could make each year from the hundreds of thousands of people wanting to get off an Emirates flight and onto Denver, Colorado or Boise, Idaho or wherever would interest them (well, perhaps not Boise so much, but you get the idea).

Emirates isn’t a member of any of the global alliances—the President Sir Tim Clark isn’t a fan—but it does have plenty of codeshare agreements: for example with Qantas, Korean and of course with flyDubai.

But perhaps now the time is ripe for an agreement between Emirates and one of the big US carriers; American, United, or Delta. But who?

American seems out of the running because of the tie-up with Qatar above. United doesn’t have the presence in the Gulf/mid-East nor perhaps the impetus to expand in that way. That leaves Delta. Now that all the US carriers—indeed almost every airline in the world—is existentially threatened and relying on government support of one kind or another, Sir Tim Clark feels the argument about state support is over. He said,

‘As far as subsidies are concerned, it is ironic that the very people who were so beastly to us in the past are now facing the same problem. But you know, you’ve got to be grown-up about this. I’m the last person who wants to see airlines go out of business because I understand the criticality of them to the global economy, irrespective of their … policies, it’s very important the industry doesn’t go under.’

Whether Ed Bastian, the boss of Delta, is susceptible to romancing from Emirates is another matter. But given the likely sums of money involved, and the desperate straits Delta finds itself in, perhaps Bastian’s previous reservations can be overcome. We will see!

How Qantas and Jetstar Are Preparing For The...

Turkish Airlines on the Verge to Resume Operations