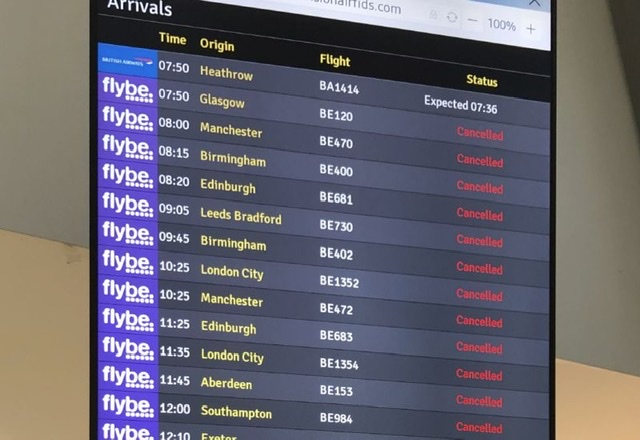 Will Flybe Be Nationalised After Airline Collapse?

Flybe collapsed on the 5th of March after failing to secure a state loan from the UK government. Despite recent rumours that the airline will recover from the collapse amid COVID-19 government bailouts, sources say that there have been no moves made for the airline to recover via government nationalisation.

Why did Flybe collapse?

Flybe is a British airline that provided more than half of the domestic flights from outside London in the UK.

Owned by Virgin Atlantic as of January 2019, investors have pulled out from supporting the airline due to the impacts caused by COVID-19.

The airline had already been experiencing financial issues, due to the rise in fuel costs, competing travel companies, and the “weakening of the pound”.

Prior to announcing the collapse, Flybe attempted to secure a £100 million loan. The loan was denied and Flybe was left without enough resources to make it through the next month.

Amid existing financial struggle, Flybe was one of the first big-time corporate airlines to collapse as a direct result of the COVID-19 global crisis.

What would happen if that state nationalised Flybe?

There has been a lot of talk about the state nationalising the Virgin Atlantic-owned airline. This would mean that the government would take control of the company, which would most likely produce a beneficial and economically-sound outcome, including increased state income and higher employment rates.

Rumours surrounding the airline being nationalised by the UK government emerged after more than 2,500 ex Flybe employees urged the Chancellor to provide them with wage support during unemployment as a result of the COVID-19 crisis. They requested that the government see reason in that they would be a vital and essential service during the aftermath of the pandemic in regard to connectivity. This was more than likely a result of the airline collapsing mere days before the government announced that they would be assisting businesses that have been negatively impacted by the global pandemic.

Unfortunately, Flybe administrators have since denied that the nationalisation of Flybe is in the works. Flybe’s accountancy firm, EY, stated:

“At this time, we can confirm that there are no discussions between the joint administrators and government about taking Flybe out of insolvency.”

Following this statement, an EY spokesperson stated that they are continuing to “be open to approaches from all parties in order to realise returns for creditors.”

Airlines and airports in the UK have now been informed that there will not be a UK government loan bailout during and due to the COVID-19 global crisis.

Best Seats? Here They Are..