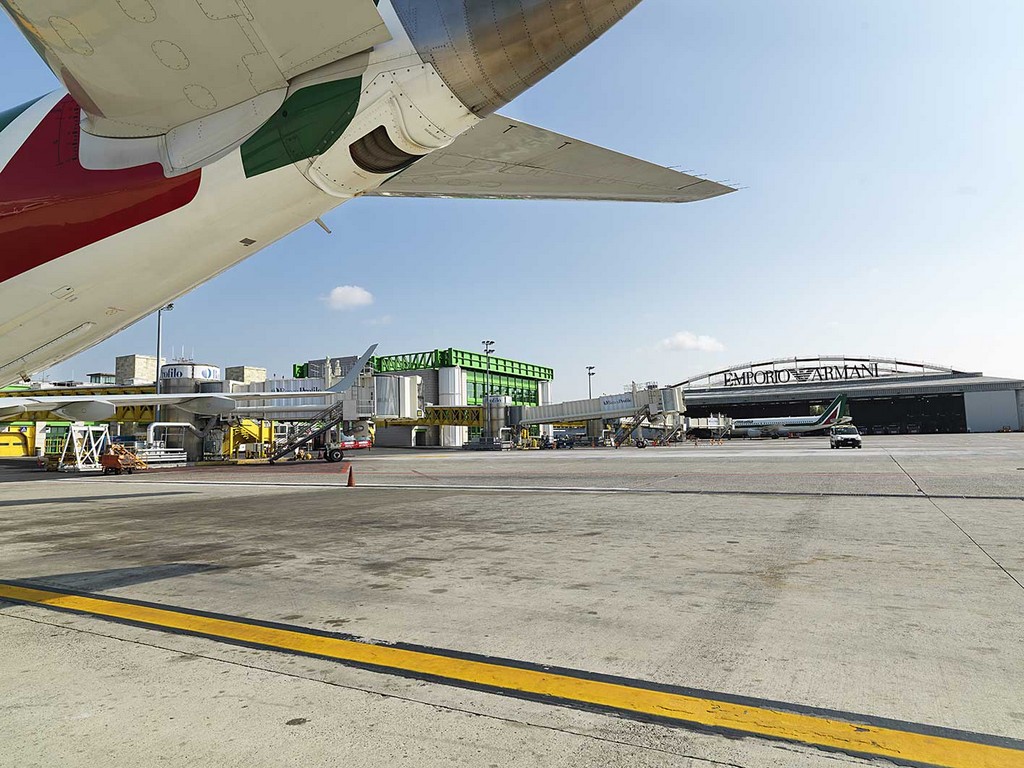 Milan’s city airport, Linate was inaugurated last Tuesday. The restyling has its foundation in three pillars: design, technology and sustainability.

Almost two years of renovation works and €40 million of investments, have led to the construction of a brand new airport that is now ready to welcome passengers to Italy’s second-biggest city.

In the last few years, SEA – Società Esercizi Aeroportuali, the company managing Milan’s airports, Linate and Malpensa, has invested a lot in the refurbishment of the airport, which opened in the 1930s. The airport’s facade was renovated in 2018, and in 2019, Linate closed for three months to have its single runway and tarmac wholly restored. That same year, works to refurbish the airport’s interior and expansion of the terminal began. More precisely, the check-in, security, duty-free areas and boarding gates have been modernised. Moreover, the terminal has been expanded with a new 3-floored building which will host gates 1 to 8, a new commercial area and a food court.

Armando Brunini, CEO of SEA, explained that all renovation processes are based around three concepts: design, given that Milan is the Italian city of design, technology, to provide passengers with the most comfortable airport experience, and sustainability, in an era where attention to the environment is crucial for both the individual and companies.

Those who have travelled through Linate will know just how convenient the airport is, given its proximity to Milan’s city centre, but it always seemed a little old. In the last few years, the city of Milan has undergone a process of modernisation: new green spaces, futuristic buildings and commercial districts have given a modern look to the city. In such a renewed environment, Linate needed to catch up with its surroundings. Therefore, the airport has been given a completely new design-inspired revamp.

To reach this goal, architects have followed the principles of neuro-architecture, or neuroscience applied to architecture. Neuro-architecture’s aim is to make people feel good and happy, reducing stress and anxiety. For example, a moment of great stress in an airport is going through security. In the new Linate, passengers will find a lot of wood in this specific area, a material that transmits warmth and tranquillity. Indeed, the choice of materials plays an central role in making passengers feel at ease while improving customer satisfaction.

After security is over and done with, passengers will often need to tidy up. Consequently, a new space has been introduced, where wooden benches and seats, walls covered in plants and green surfaces will make everyone feel more relaxed. Moreover, the new Linate has signed an agreement with “La Triennale” of Milan, more precisely with its Museum of Italian Design. This international cultural institution will lend artworks by Italian designers to the airport every six months. These artworks will be displayed in common areas, such as waiting areas, check-in areas, etc. These works of art will give the airport a cultural identity in harmony with that of its city. Art in the terminal will transform the airport, generally considered a “non-place“, into a culturally rich and pleasant environment to spend time in.

To further reduce any travel stress, Linate has invested in the newest technology. At security checks, for example, passengers won’t need to open their carry-on baggage to take out liquids and laptops anymore. Modern machines will make the security process smoother. Moreover, such new technology will help people to avoid long queues, which is also great for social distancing.

A novelty at the city airport is also the self bag drop. This technology enables passengers to check-in their bags independently. In line with the current pandemic, these self bag drops will also allow people to connect one’s smartphone to them so that passengers don’t have to touch the screen – instead they can easily do everything from their devices.

Another great technology introduced at Linate is the so-called face boarding. At the check-in desks, passengers will link their passport/I.D. and their boarding pass to the biometric print of their faces. Thanks to this association, they won’t be asked to show either their identification document or their boarding pass at any other checkpoint, boarding gates, for example. Here, a standing token will scan the passenger’s face and link it to the pre-saved identity document and passport, letting the passenger board the plane. This is excellent news for passengers who feel worried about flying during a pandemic. Indeed, this new technology is expected to reduce lines at security checks and boarding gates and the number of times passengers need to interact with an airport’s employee.

Last but not least, in the coming months, a new line of Milan’s subway, line M4, will connect the airport and the city, drastically reducing the amount of time needed to get to the centre.

The new building, or “corpo F”, with a surface of 10,000 square meters, has three floors: the ground floor is where we find boarding gates (1-8), the first one is the commercial area, while the second and last one hosts the food court. Moreover, a part of the old airport has been completely demolished and rebuilt following more strict sustainable building standards. Consequently, Linate has been awarded the BREEAM-in use excellent, an environmental certification for structures built according to sustainable principles. In particular, the new buildings of Linate have received appraisal for the following characteristics: energy saving, user health and well-being, attention to resource use (water, building materials, land consumption), waste management and environmental pollution.

Hope for The Future

Last winter, Linate registered a -85% passenger traffic compared to the same period in 2019. This percentage decreased to -80% in May, while the first days of June saw a -70%. Such data is still a long way from traffic levels in 2019. However, with the summer season ahead and the rollout of vaccines against COVID-19, Brunini hopes in a smooth but constant recovery for the city airport, which is now ready to take off… in style.

At the inauguration, a special guest was invited, Sergio Mattarella, President of the Italian Republic. During his speech, Mattarella underlined the importance for the institutions to boost the recovery of the aviation industry and Tourism after the worst crisis these two sectors have ever experienced.

What do you think of the new Linate? Let us know in the comments below!

Delhi International Airport - It has Been All Too ‘Moody’ Lately

Mexican Airlines Prohibited From Adding Flights to The United States

Read Article
This morning, New Zealand’s Auckland Airport has announced a job fair to help rebuild the workforce, with more…
Read Article
Wizz Air is an ultra-low-cost carrier incorporated in Hungary.  It serves many cities across Europe and some destinations…