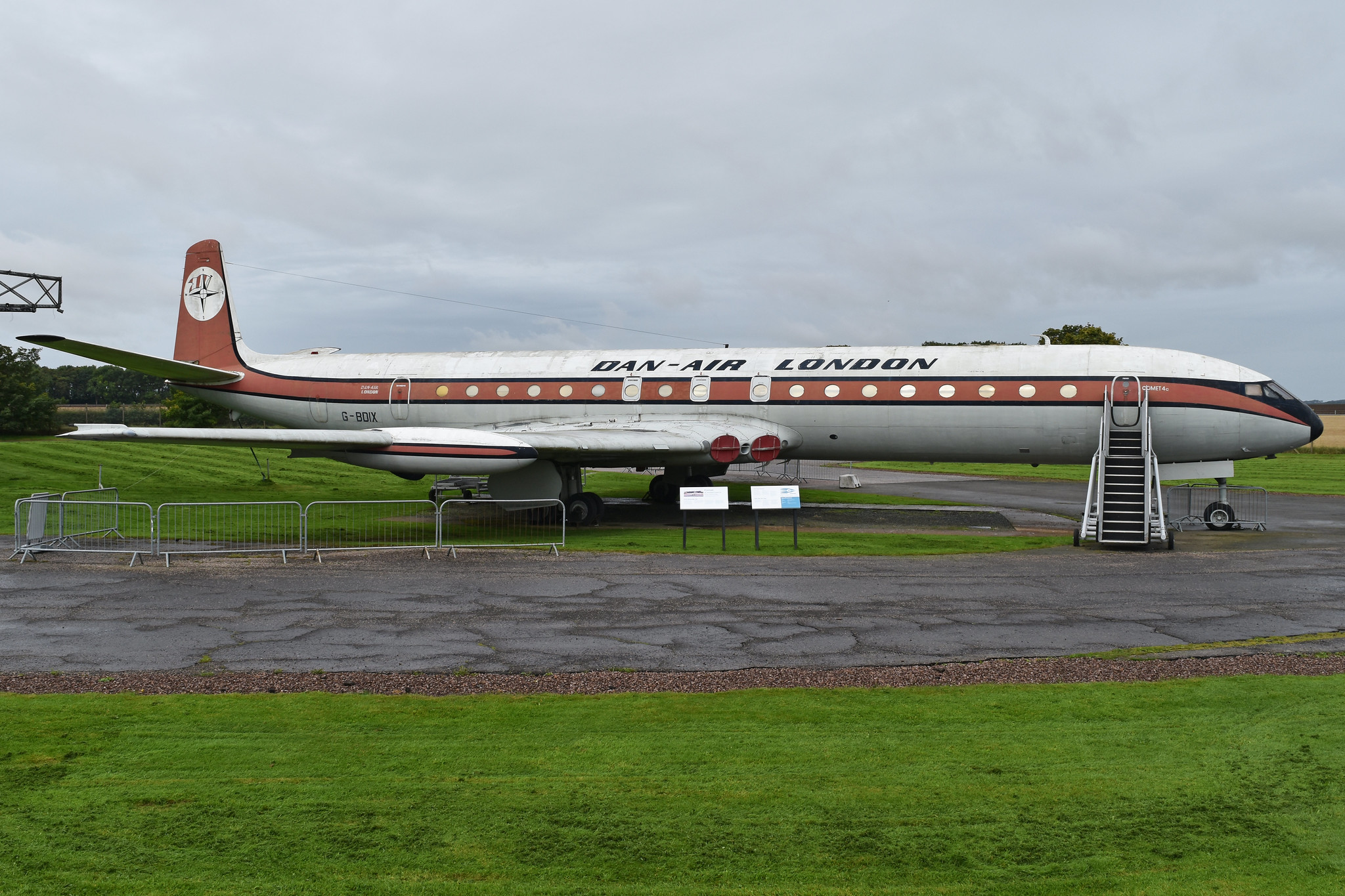 Ever wondered what paved the way in designing modern jets of today? The world’s first commercial jet de Havilland Comet was instrumental in helping to shape the future of air travel. Quiet cabins, pressurized air to breathe, and fast travel, we must all thank the Comet for doing this incredible job.

Introduction of jet travel to the world

Until the 1950s, air travel was considered not so fast and noisy experience. The sound of piston engines filling the cabin and unpressurized cabins were extremely uncomfortable. Due to lack of pressurization, pilots flew low to remain within the lower part of the troposphere for adequate pressurized oxygen to pump into the cabin. Pilots had to fly through bad weather rather than above it.

The idea of jet engine propelled aircraft was born at this time. De Havilland Comet manufactured in Hatfield Aerodrome in Hertfordshire, United Kingdom flew for the first time in 1949. The glossy, bullet-shaped, mirror-like aluminium fuselage with square-shaped windows intrigued the public. With no other commercial jets in service, the Comet was the envy of the world.

Two years after test flights, on 2nd May 1952, Comet was scheduled for its first commercial flight from Rome to Johannesburg. The trip took 23 hours with stops in Beirut, Khartoum, Entebbe, and Livingstone. The jet-powered by four de Havilland Ghost turbojet engines climbed to 40,000 feet, cruising at 400 knots, higher by 25,000 feet and faster by 100 knots compared to the fastest piston-engine aircraft at that time. Fantastic service, travelling high above clouds and still be able to breathe, enthralled the passengers. Suddenly the world became a smaller place.

BOAC (British Overseas Airways Corporation) also the launch customer for the Comet, introduced flights to Singapore and Tokyo within the next few months. As the word spread, de Havilland was able to garner big orders from Air France and Canadian Pacific. Pan Am was the only American airline that ordered Comet. The airline industry in the United States – which was then highly profitable – was not very keen to spend money on fuel-guzzling and new aircraft. Very soon as it captured the awe of the public across the world, de Havilland faced devastating news.

The downfall of the Comet

Between 1953-1954, three fatal crashes of the de Havilland Comet led to the grounding of all the Comet fleet. There were many flaws with the aircraft, particularly its design. The Comet had square-shaped windows with edges. When the plane flew through severe turbulence, it caused severe stress on the outer fuselage creating cracks beginning from the window edges, as it occurred with BOAC Flight 783. The other flaw was that the aircraft’s fuselage was thin, to keep it light. For the comfort of passengers, when the aircraft climbed through thin air layers, pressurized air had to be pumped in and the opposite during descent. This caused the expansion and contraction of its thin fuselage, thereby making it vulnerable to tear apart.

Comet was also the first aircraft with hydraulically operated flight controls. When pilots wanted to bank the aircraft, the hydraulic fluid was pumped through a series of pipes. These pipes with fluid connected to control surfaces eventually moved, causing the aircraft to bank. Although with sophisticated technology in place, Comet had leak issues. Piots carried hydraulic fluid to fill if the fluid leaked.

De Havilland Comet had to be redesigned. This created a huge opportunity for other aircraft manufacturers to introduce their jets and fill in the gap created by Comet. Boeing 707 which was already under test flight, entered service in 1958 for commercial use. The company later produced one thousand of these jets.

De Havilland thereafter redesigned Comet 1 and introduced Comet 2, Comet 3 and Comet 4 with oval-shaped windows, thicker fuselage among other changes. Although it went on to become a safer jet in the skies, Boeing 707 became the industry’s favourite receiving hundreds of orders from airlines. Comet could never regain a foothold in the industry.

Though ultimately Boeing triumphed in the airline industry by making passenger-friendly jets and reliable aircraft, the legacy of the first passenger jet de Havilland Comet lives on. Comets were in service until 1997.

A Relay Around the Mekong Delta in Vietnam

Read More
As of yesterday, Airbus has announced the launch of a new mobile app, TripSet. The app is designed…
Read More
With international travel restrictions eased on Monday making it legal to travel for leisure again, Gatwick Airport is…