The relationship between the state and commercial aviation is always a delicate one. We’ve reported that amid the coronavirus outbreak airlines across the world—both state and private—are seeking state assistance and also in countries with all manner of economic system; from the high temple of capitalism, in the US with all major airlines and Boeing looking for help, to Lufthansa in Europe, Air India and so on. But nowhere is the relationship more intimate than in the countries hosting the ‘mega-connector’ airlines, the Gulf States, Singapore and a handful of others. 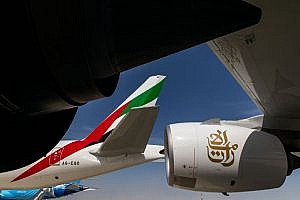 Many countries have closed their borders to most arrivals, ranging from a total ban to allowing nationals from some countries or departure points but generally allowing the repatriation of its citizens and permanent residents. (with some exceptions) But the connector host countries—the UAE, Singapore, Qatar and Hong Kong have tended to keep their transit hubs open.

Of course, if you wanted to maximise the chances of spreading a virus globally that’s an efficient way of doing it—keep hundreds of thousands of people moving across the world and prepare for a little leakage out of the airport into your country. Now, almost all of the major transit hubs have now rightly closed.

So to Emirates. On Sunday 22nd, it was reported that it was going to temporarily suspend all passenger flights by 25 March 2020. In an environment where Cathay have suspended 96% of its flights, Singapore the same and Turkish flying to a mere five destinations out of a previous 200, the announcement was consistent. It was released just a few hours before the UAE authorities said it was halting all in-and-outbound flights for two weeks, thus completely halting operations by the airline including presumably cargo flights which the airline had said it would keep running.

Then, Emirates appeared to keep some operations going by tweeting later on Sunday ‘Having received requests from governments & customers to support (the) repatriation of travellers, Emirates will continue to operate passenger and cargo flights to few countries until further notice, as long as borders remain open, and there is demand.’

So there’s the caveat in a strangely non-specific tweet—’as long as borders remain open and there is demand.’

It seems that the massive Dubai airport will need to remain open for a while yet, at least partially. However—other than cargo flights—Emirates will surely need to cease operations in a few days’ time. It’s hard to imagine how there is enough demand for any of its routes when almost all borders are closed.

We’ve echoed the view that the viral outbreak might spell the end for carriers in poor financial condition. We’d imagine that one survivor would be Emirates, but only time will tell.

While you’re there, spare a thought for the medical community in your country, many of whom are deliberately exposing themselves to the virus; every one of them a hero.