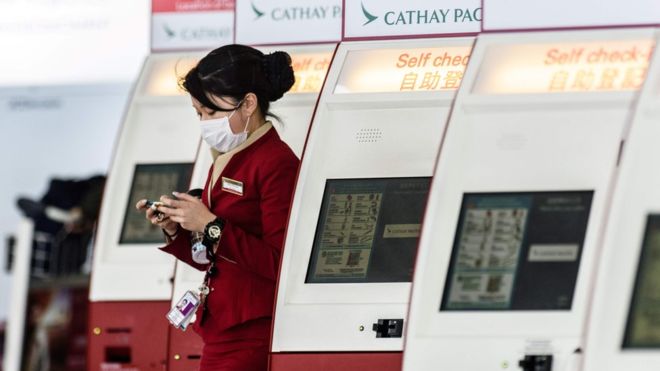 The Hong Kong flag-carrier Cathay Pacific has had a torrid time in the past few months. Firstly the mass anti-government protests and now the outbreak of coronavirus in mainland China, have made business difficult especially coming at the time of the Chinese New Year, when many millions of people expected to travel home—a highly profitable time for local airlines.

No one has had a more difficult time than the CEO, Augustus Tang Kin-wing, who only began with the airline in August.

Today, Wednesday, Tang announced by video call asked all employees 27 000 to take three weeks of unpaid leave, including senior managers, over the period 1st March to end June. He said that there is a significant drop in demand for flights caused by the virus outbreak, comparing the decline in business during the global financial crisis and the SARS outbreak of 2003 during which Cathay cut capacity by 45%. ‘Preserving cash is the key to protecting our business,’ said Tang.

Cathay Pacific, who also owns LCC Cathay Dragon has announced that it was cutting flights to the mainland by 90% and reducing flights elsewhere, a contraction by 30% overall. The airline has also asked suppliers to cut prices, stopped all non-essential spending and postponed same major projects.

All the major domestic airlines, including China Eastern, China Southern and Xiamen have severely reduced flight frequencies and taken a major blow on share prices. Many international airlines including; British, AirAsia, Delta, Indian and Lufthansa have also suffered, but less so than the Chinese.

With other airlines in Hong Kong struggling, the short-term future looks bleak.

At the time of writing, the number of cases in China has exceeded 24 300 and 490 deaths have been reported.