Home » Brussels Airport to get US Preclearance
AirportsAviationTravel

Brussels Airport to get US Preclearance

It was announced today that Brussels Airport, Belgium, is set to become the third EU member-state to receive US Preclearance making travel between Europe and the States easier. The new checkpoint will be the third in Europe – the others being Dublin and Shannon in Ireland – and is the result of discussions that began in 2017. 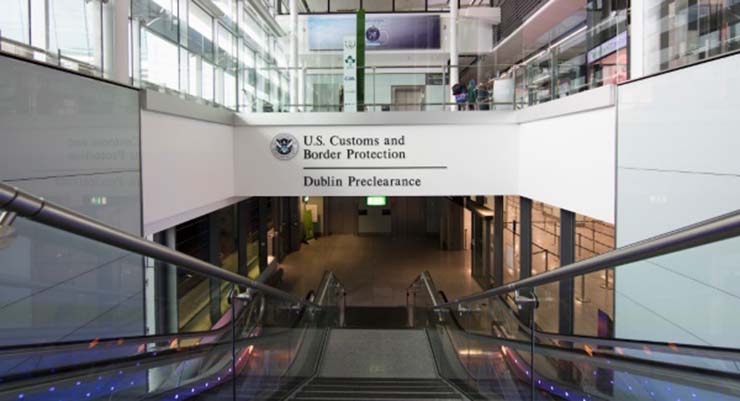 Preclearance is a US based system in which US-bound passengers can pass immigration and passport control checks prior to boarding flights to the United States, making disembarking at the destination faster and allowing passengers to progress straight through to baggage reclaim. The concept was derived due to the long immigration wait-times found at US airports, and helps reduce the burden of checkpoints in the country; It is also seen as a safer way to screen ‘high-risk’ passengers and routes before arrival in the country. Peculiarities in the US Immigration system also requires all transit passengers, too, pass through immigration as they do not operate a sterile international transit facility – Most countries allow passengers connecting internationally to stay in transit without clearing immigration.

The Preclearance checkpoint is planned to have 30 US Customs and Border Protection Agents stationed at it, and help work towards the US Administration’s aim for a third (1/3) of air passengers into the United States to transit through Preclearance facilities by 2024 – A goal we have not yet seen much work towards.

Typically the queues at US Customs are long | (c) Business Insider

Is Preclearance Efficient? Will it actually happen?

Currently there are only two Preclearance checkpoints in the EU, both situated in Ireland: Dublin and Shannon. Whilst the US Government seem confident in the plans to open the third in Brussels, it remains to be seen whether or not the checkpoint will truly go ahead. In the past five years, facilities were rumoured to be in the pipeline for Bogota, Dubai, Jeddah and Tokyo – Yet these plans never manifested.

There are also some who argue that Preclearance facilities actually slow down the transit of passengers; Whilst airports see these as a competitive advantage to offer a more seamless experience to US bound passengers, the reality is such checkpoints can add to flight delays caused by secondary inspections. If a person needs to be scrutinised in more-depth, it can cause delays to either the passenger (who may have to be offloaded and have their bags removed from the flight) or even entire flight.

Schemes such as Global Entry (a ‘trusted traveller scheme’ for those who regularly travel to the US) are already available to passengers looking for faster transit times, with immigration passable in just a few moments. This raises the question – is Preclearance really worth the hassle?

Let us know your thoughts and experiences of the system below!

How Ethiopian Airways is Countering the Downturn