Japanese based carrier, All Nippon Airways (ANA), is in talks with banks to raise up to $4.6 billion according to Nikkei. It reported that ANA will potentially acquire $4.6 billion in new financing to help avert the crisis spurred by the coronavirus. 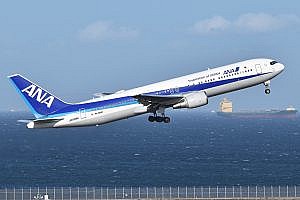 ANA is requesting these funds from the Development Bank of Japan and private banks — DBJ, MUFG Bank, Sumitomo Mitsui Banking Corp. and Mizuho Bank. ANA Holdings (ANA’s parent company) has, however, not settled on a final number for the financing that it hopes to secure.

The airline is requesting these banks to issue “subordinated loans.” According to Bankrate:

A subordinated loan is a type of debt that receives a lower priority level in terms of its claim to a company’s assets when the company goes bankrupt. If a company defaults on its debts, the debts have an order of priority that determines when or if they will receive payment.

This is an attempt to strengthen ANA’s financial position giving it “a greater ability to borrow from banks.“

ANA operates a fleet of Airbus A380 Superjumbos | © Kevin Hackert

How hard has COVID-19 Hit ANA?

According to ANA, travel demand hit “rock bottom” in the months following the coronavirus rise in March. This resulted in a $1 billion net loss for Q1 2020. Ichiro Fukuzawa, Chief Financial Officer and Vice President of ANA Holdings said in a statement last month:

Passenger demand for both international and domestic flights declined significantly, due to worldwide government travel restrictions and the Declaration of the State of Emergency from the Japanese government.

Revenue from ANA’s international passenger revenue dropped 94.2% from last year. While its domestic flights revenue declined 86.5%.  If we consider ANA’s first-quarter statistics for air traffic we can see why it is struggling.

Although the number of domestic passengers carried by ANA crossed 500 000 in June, it only formed 17.6% of total passengers it carried last year. ANA thinks that “trends of recovery are beginning to appear in Japan’s domestic traffic.” But it still has a long way to go before it can fully restore its domestic network.

Its international stats are even more grim. June passenger numbers only formed 3.8% of that of last year, with load factors not exceeding 30%.

Despite the massive impact the coronavirus has had on Japan’s aviation industry, ANA is hopeful for a recovery soon.

Do you think that Japan’s largest airline can bounce back from the current crisis? Let us know in the comments!