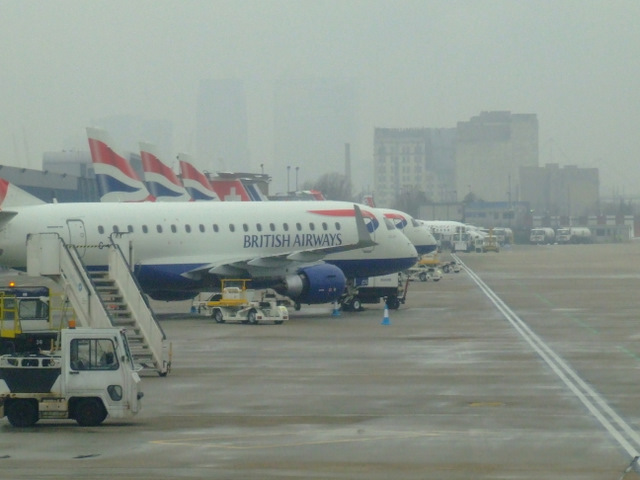 It’s a foggy day in London Town as heavy fog cancels flights from the capital’s Heathrow (LHR) and City (LCY) airports – with nearby Gatwick and Stansted also experiencing significant delays.

A foggy day in London town: heavy fog cancels flights to and from the capital

The Met Office issued a yellow weather warning for fog this morning across London and England’s East and South East regions. Yellow warnings are issued when it is likely that severe weather conditions will have a low-level impact. Dozens of flights have been affected since Sunday, with British Airways cancelling short-haul and domestic departures from Heathrow and more flights cancelled from London City Airport.

As the weather delays are out of airlines’ control, passengers will not normally be eligible to receive compensation. However, the CAA expects airlines to be proactive in providing passengers with updates regarding flight disruption. The CAA’s consumer lead, Anna Bowles, explains further. “If a flight is delayed due to adverse weather conditions, airlines have a duty of care to look after their passengers, which can include providing food and drink, as well as accommodation if people are delayed overnight.”

At Stansted Airport (STN) on the other side of London, only 60% of flights are arriving and 55% are departing on time, likely due to the inclement weather. An airport weather alert warns of fog with visibility below 600m whilst the airfield’s long-term weather forecast suggests periods where visibility is just 200ft.

Today’s weather is just another in a long line of delay justification for the UK’s airports, which have seen staff shortages and strikes cause disruption all year.

Can planes fly through fog?

The simple answer is ‘yes’. The less simple answer is – well, it’s less simple. Planes can fly, and indeed land, in fog, but there are a lot of caveats and considerations involved. Air traffic controllers will instruct pilots to maintain a greater distance between themselves and other traffic, resulting in fewer departures and arrivals each hour. Taxiing will also take longer at much slower speeds.

Typically, when flying an established approach, a pilot will follow the instrument landing system (ILS) approach path indicated by the runway’s localiser and descend along the glide path until they reach the decision height – this is the point of no return. At the decision height, the pilot must have ‘adequate visual reference to the landing environment’ – they must be able to see the runway – before they can continue descending. If the runway is not visible at this height, the pilot should execute a ‘missed approach procedure’ and can either fly around and try again, or divert to an alternative landing site.

There are three ILS categories (I, II, III), each with different limitations. London’s Heathrow, Gatwick and Stansted airports are all Category III airports, which means aircraft can make category III approaches if equipped to do so. Category III has three subcategories: A, B, and C – with A having the highest decision height (pilots must decide sooner whether or not to land or go around) and C essentially being fully capable autoland – with no decision height and no runway visual range.

Most airlines will opt for Category III-equipped aircraft, to give pilots a greater margin to land at their planned destination in the event of adverse weather. Some smaller regional airlines, however, will fly Category II or I aircraft.

London City Airport is also Category III, but it poses its own unique challenges, including a short runway and an unusually steep glide path (5.5 degrees, compared to a typical 3 degrees) due to the runway’s proximity to the high-rise buildings of central London. Because of the complexities of the approach, whilst the airport is designated as a Category III, its weather minimums are more restrictive and as such, inclement conditions can see the airport close at short notice – leaving aircraft to divert to other nearby airfields.

Has today’s fog affected your travel plans? Let us know in the comments!