The Chinese manufacturer COMAC (Commercial Aircraft Corporation of China) based at Shanghai Pudong airport is to open a second production line for its ARJ21.

The Advanced Regional Jet, Xiangfeng (‘Soaring Phoenix’) had its maiden flight in November 2008 and began service with Chengdu Airlines in June 2016. Thus far 23 examples have been delivered to three Chinese airlines and the lessor China Flight General Aviation Company. (‘CFGAC’) There are 278 aircraft on order. 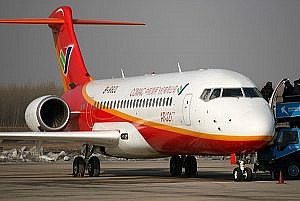 Currently, COMAC is limited to producing only 15 ARJs each year on a single line. The second production line will double this capacity; hardly itself causing the executives of Airbus or Boeing sleepless nights, (they have other concerns!) but a potential rival for the near-global duopoly. The Chinese market is expected to exceed the size of the US market soon and represent a huge demand for aircraft. It is reported that COMAC has room for a third production line at the site.

The ARJ21 has been plagued by multiple problems; noise, weight, and near obsolescence in many technological areas, but the newer examples have a redesigned cockpit layout to ease pilot workload and reduce training time.

Simultaneously the factory in Shanghai is producing the C919 narrow-body aircraft, intended as a direct competitor to the 737 MAX and Airbus A320 family. 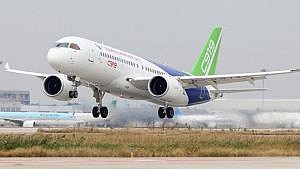 The fifth prototype completed a flight test at COMAC’s facility in Nanchang on 5th March. The 919 has 305 firm orders and will carry up to 168 passengers over a distance of 5 500km. A major drawcard for the aircraft is its price; a mere $50 million, compared to double that for the Boeing or Airbus, making it highly attractive for developing-world customers. And, incredibly Ryanair. The Irish carrier signed an MOU in 2011 for a 200-seat variant of the C919 and remains interested.

With the acknowledged industrial prowess of the Chinese, it seems COMAC might be a major player in the next decade, beginning with the ARJ21.