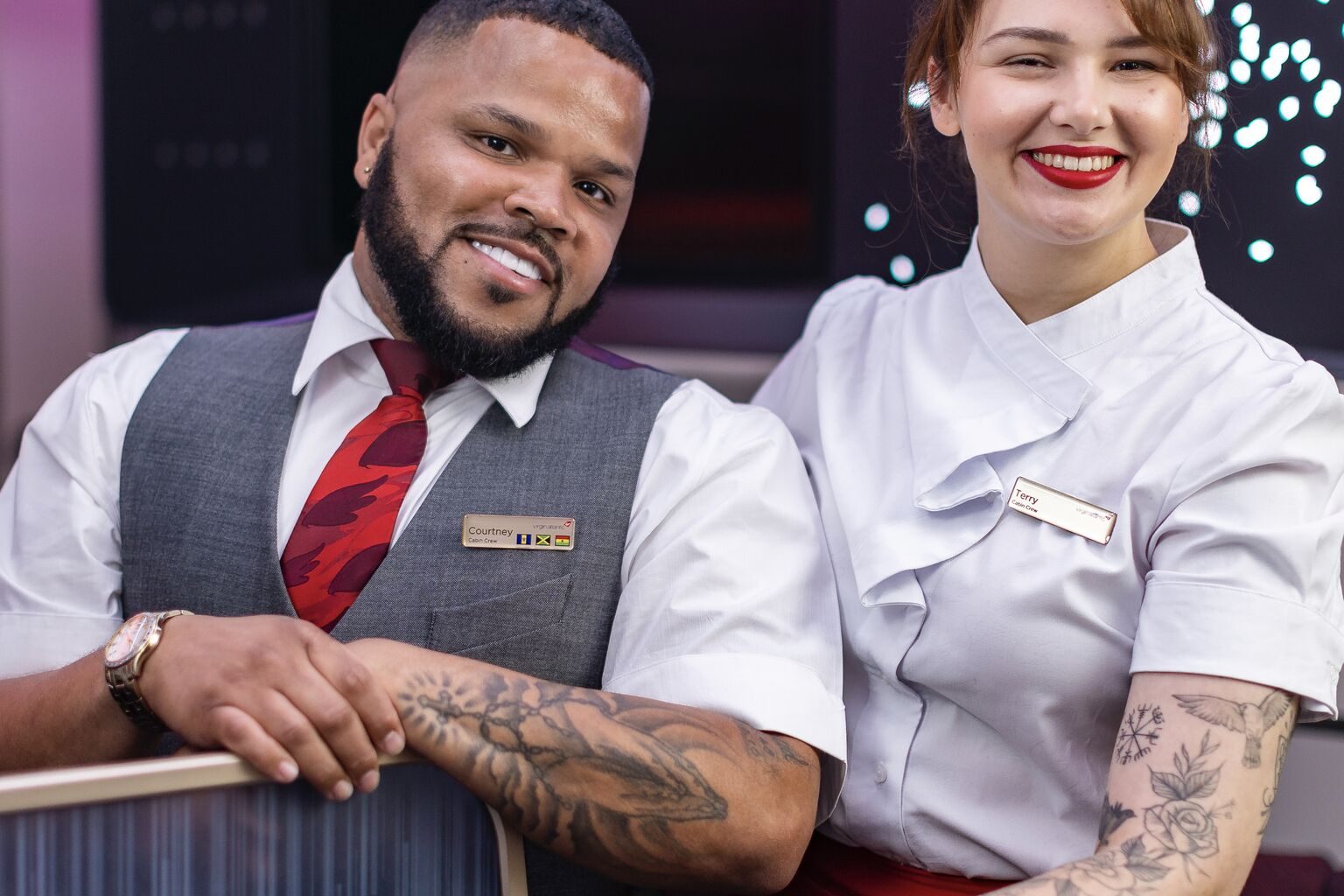 There are some things that you see at every airline when looking at cabin crew job descriptions. Must be able to swim a short distance unaided, for example. Be willing to work shifts covering 24/7, 365 days a year – including weekends, holidays, and yes – Christmas.

Another ubiquitous requirement? No visible tattoos.

The aviation industry is notorious for its focus on aesthetics. From airlines’ strict hair, makeup and personal grooming guidelines to elegant, designer-label uniforms and sky-high heels, the image we’ve come to imagine of a flight attendant is one that simply oozes glamour. Image and grooming are important to airlines, with great emphasis on neat and tidy hairstyles, clean and simple manicures, and fresh, feminine makeup. Visible tattoos, piercings, and other body modifications – including ‘outlandish’ or unnatural hair colours and styles – have long been a no-no, and many an applicant has been turned away for being unable to meet the stern, oft draconian requirements.

But the tides are starting to turn.

At Virgin Atlantic, we champion individuality and encourage our people to bring their true selves to work. We know many individuals express their individuality through tattoos, it’s right that we allow this for all our people.

The move comes three years after entrepreneur and Virgin Group founder Richard Branson’s carrier relaxed uniform rules back in 2019. This rule change meant that female cabin crew were offered trousers as standard, where they had previously only been available on request. Crucially though, the new guidelines allowed female cabin crew to ditch the makeup and fly bare-faced – although the existing makeup guidelines remained in place for those who wished to wear it.

“Not only do the new guidelines offer an increased level of comfort,” the carrier explained via spokesman Mark Anderson at the time, “(But) they also provide our team with more choice on how they want to express themselves at work.”

The move was unprecedented. At the time, fellow UK-based carrier and longtime rival British Airways had only recently begun to allow female cabin crew to wear trousers – and all these years later in 2022, make-up is still very much a part of their uniform guidelines.

Nearly half of young adults tattooed

In 2015, survey results showed that a fifth of all British adults were inked, with 30% of 25- to 39-year-olds having at least one tattoo. A year later, a US poll found that 29% of people had a tattoo – an increase of 8% from a poll four years prior. Forty-seven percent of millennials – people born between 1982 and 2004 – said they had one.

So that’s why it’s so surprising to see such staunch opposition.

It’s hard to find a definitive answer as to why tattoos are so taboo. What we do know is that in many countries, cultures, and religions, tattoos are highly stigmatised and, in some cases, even banned. Often, they’re associated with the highest levels of organised crime. Many cultures and religions believe they’re forbidden by God. For many, even in Western cultures, tattoos are still associated with thugs, criminals, a rough upbringing, and an unprofessional attitude. It stands to reason that a flight attendant – particularly one working for an international airline and travelling globally, serving passengers from all faiths and backgrounds – might be expected to remain ‘neutral’ in the matter.

In 2019, Air New Zealand became one of the world’s first major carriers to drop its ‘no visible tattoos’ policy. Lifting the tattoo ban allowed all employees – customer-facing or otherwise – to display ‘non-offensive’ tattoos at work. This meant that those with Māori heritage – who wear tribal tattoos to mark their genealogy and heritage – no longer had to hide. In 2021, United Airlines relaxed its policies similarly – allowing staff of all genders to wear makeup and nail polish, and allowing visible tattoos – so long as they’re smaller than a credit card.

And just this week, new Australian low-cost carrier Bonza announced its uniforms – a mix-and-match wardrobe of casual and comfortable styles for all employees, with no grooming guidelines or tattoo bans anywhere to be seen.

But in 2020, a man had his application with British Airways terminated after a hand tattoo was spotted during his interview. Frustratingly, he was applying for a non-customer-facing role within the company. This story led to a company-wide review of tattoo policies, with the carrier now asking applicants to confirm their ‘tattoo status’ early on in the application process.

What are your thoughts on this move by Virgin Atlantic – do you support it? Let us know your thoughts in the comments down below!

Read More
Finnair has launched new Business Class cabins for its fleet of Airbus A350 and A330 long-haul aeroplanes. The…
Read More
On Monday, Easyjet celebrated their first flight from Manchester Airport to Newquay in Cornwall. The new route comes…