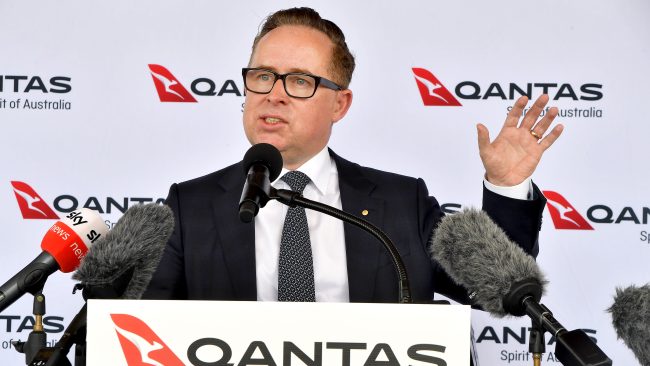 The Transport Workers Union have called for Qantas CEO Alan Joyce to resign as Qantas issue a formal apology to customers.

On Sunday afternoon, the Australian airline released a statement apologising for the frequent flight delays and cancellations customers have experienced in recent months.

Providing a statement via video, CEO Alan Joyce said that all frequent flyers based in Australia and New Zealand will be offered $50 towards a Qantas flight as he acknowledged that the return to flying hasn’t gone smoothly.

“Over the past few months too many of you have had flights delayed, flights cancelled or bags misplaced,” Mr Joyce said.

“There are good reasons why, but when it comes to what you expect from Qantas, it’s not good enough.”

Mr Joyce then stated that the airline would be rolling new technologies, valued at $15 million, to enhance the customer experience as well as adjusting schedules to have more reserve staff on hand as they deal with a 50 per cent jump in sick leave.

On the hot heals of the announcement, the Transport Workers Union (TWU) called for the resignation of Alan Joyce, saying that the general public will see the discounts as an attempt at damage control.

“Australians see through this stunt. The thousands of passengers who’ve spent hours in call centre queues following cancelled flights, delays and lost luggage won’t want to waste more of their time attempting to cash in a voucher to buy themselves more of the same chaos,” National Secretary Michael Kaine said in a statement.

“This is Alan Joyce at his absolute worst, 50 bucks he says will fix this crisis. No, what’s needed is Alan Joyce to resign and for the federal government to put in place a safe and secure skies commission and an independent body that can make decisions in aviation in the publics interest.”

As we have reported extensively at Travel Radar, TWU has been on a crusade against Mr Joyce’s leadership of Qantas for quite some time, reaching boiling point when the Federal Court found them to have illegally sacked 1,600 ground handlers during the 2020 lockdowns, outsourcing work to contractors in breach of the Fair Work Act (a ruling that Qantas is looking to appeal).

What are your thoughts on the state of Qantas? Should Alan Joyce step aside as CEO of Australia’s flying kangaroo? Or is he just caught in difficult circumstances? Let us know in the comments.

Read Article
airBaltic announced, on Thursday, that it will receive up to EUR 250 million in equity from the Latvian…
Read Article
North Korea has launched a ballistic missile over Japan in what is being seen as a deliberate attempt…