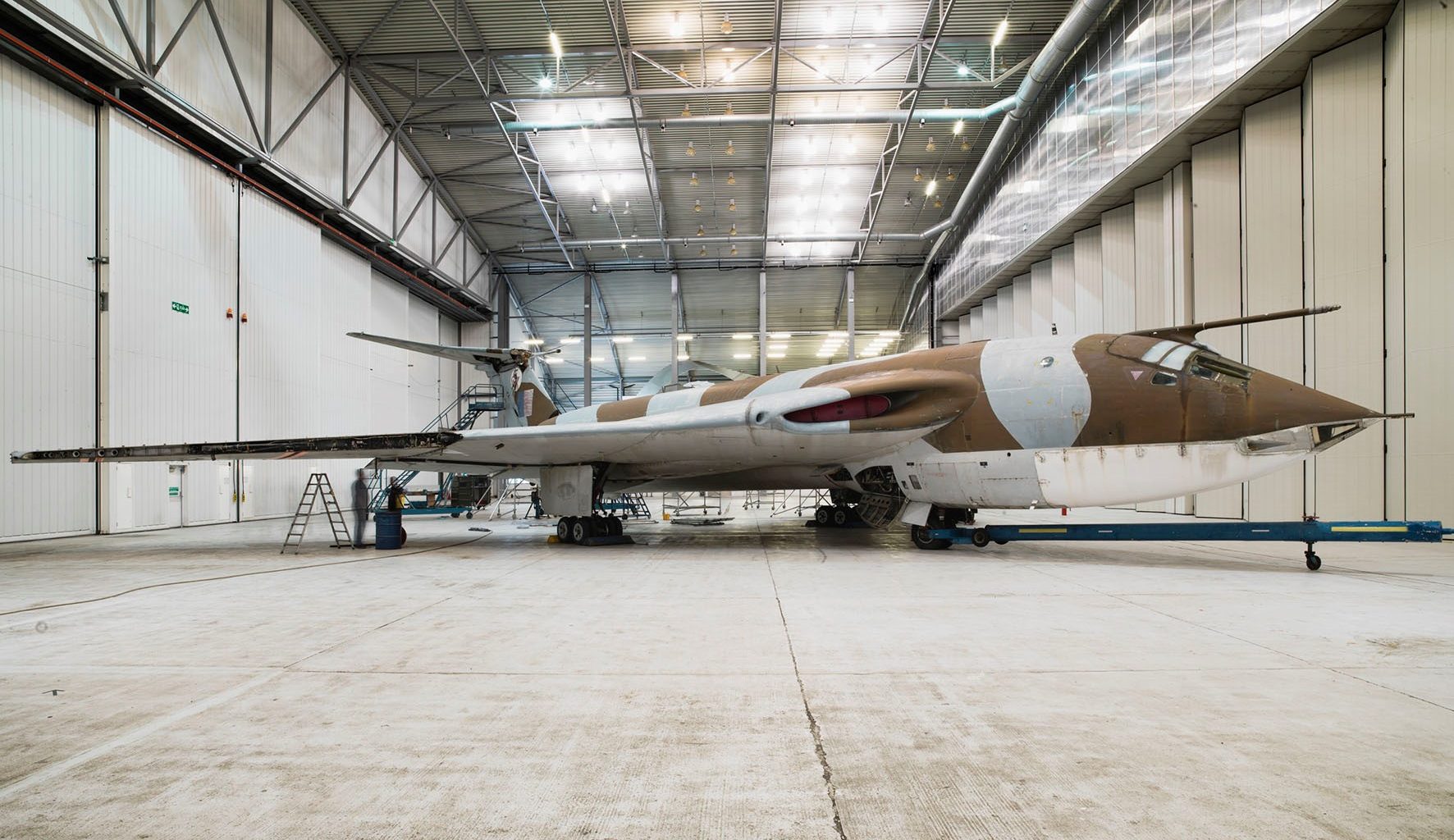 The Handley Page Victor B.1A XH648, with a wingspan of 33.5m, is the only surviving aircraft of its type and can now be seen at the Imperial War Museum (IWM) Duxford in Cambridgeshire.

The jet-powered strategic bomber, which was responsible for carrying a nuclear bomb as a deterrent during the Cold War in the 60s and 70s, has undergone a meticulous full-scale five-year restoration project.

The Cold War is the name given to the period of political and military tension between The United States and the Soviet Union. It is known as the Cold War because both countries had nuclear weapons, but neither of the countries ever directly attacked each other.

The IWM acquired the aircraft in 1976 on its retirement from service, and the museum’s restoration and conservation project is the largest ever undertaken. The project has been supported by a fundraising campaign that has raised over £25,000 in donations from individuals.

Specialist conservators undertook the restoration process, machinists and volunteers, and some of the detailed work included paint stripping, corrosion treatments, and other parts of the aircraft removed or new parts fabricated.

The Victor was initially built as a B1 model and served as part of the Far East Air Force during the confrontation with Indonesia in 1962-63.  On return from Indonesia, the Victor was converted by Handley Page in 1965 into a two-point tanker and spent 10 years with No.55 Squadron at RAF Marham before IWM Duxford acquired it in 1976 on its retirement from service. The aircraft has been repainted in its markings from its service with the No. 55 Squadron.

Sqn Ldr Garden “Gary” West, 83, who flew the plane as a bomber and as a tanker during his time in the RAF, said: “I’m thrilled to bits to see it like this again It’s the only one left. It means a lot to us. We could carry thirty-five 1,000lb bombs, which was much more than the other V bombers. We had the nuclear weapon during the cold war, and that’s what we were here for. It wasn’t so much fun, but it was fun later when it became tanking, and we could do air Victor to Victor tanking as well, which was quite fun.”

Head of Conservation at IWM Duxford, Jon White, said the restored Handley Page Victor XH648 was “the only one of its kind left.”

“There were only ever six of this particular one made, and this is the last surviving one,” he said.

“That’s why the museum has spent a long time on it.  It’s a unique aircraft and shows an exciting part of British aviation history.”

“It was one of three aircraft designed to be Britain’s first nuclear bombers.

“It’s kind of an iconic aircraft for its shape; it was so futuristic, and even now, it does look futuristic for an aircraft.” He added.

Former Group Captain Alistair Sutherland recalled serving as a navigator on the plane.

The 89-year-old said there were two navigators and an electronics officer in the back of the plane, and a pilot and co-pilot at the front.

“It was very cramped, but you were all pretty busy, so it worked out pretty well and we were all friends and especially if you went overseas we had some good nights abroad,” he said.

The IWM aims to preserve historic objects as reference pieces for future generations. This means that some of the original equipment within the aircraft is missing and cannot be replaced. Jon White added that the RAF has a policy of doing spares recovery, which means anything that is useable on something else, they will keep. He concluded by saying: “This is one of the things in doing conservation, of something this large – we will never ever finish doing this because there will always be one more bit that we need to find or do, so it’s a continuous, ongoing procedure.”

Following the earlier retirement of the Valiants in 1965 and Vulcans in 1984, due to its technological sophistication and superior capabilities, the Victor was the last of the V-bombers to be retired from service on 15 October 1993.

Will you be visiting the Victor at its new home in Duxford? Let us know!

Aviation Reporter - Jacey Wallace is a qualified Audio Describer, Live Captioner and a self-confessed word nerd. After growing up in Shropshire in the UK, Jacey emigrated 10 years ago and became a Sydney Opera House Tour Guide, but now resides in the beautiful Royal National Park in Sydney and enjoys Aviation history, gardening and playing the guitar.

Read Article
Brisbane Airport is set to host a careers expo on Saturday, 10 September, in its Skygate Shopping Precinct.…
Read Article
By any measure, this decade was revolutionary and in many ways chaotic. But it was highly significant in…