The flight data recorder (FDR) of crashed Sriwijaya Air flight SJ182 has been recovered from the Java Sea, three days after the plane went down on its journey from Jakarta to Pontianak for the believed loss of 62 lives. The finding comes as the first names of those on board the aircraft are becoming known. 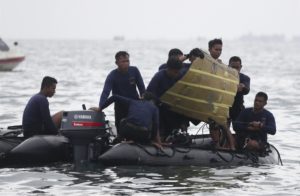 The FDR was retrieved by Indonesian divers on 12 January, around 20m down in water between the islands of Lancang and Laki. The islands are part of the Thousand Islands island chain just north-west of Jakarta’s coast, around 20km from the capital’s Soekarno-Hatta international airport.

A radio beacon for the cockpit voice recorder (CVR) has also been located in the same area, suggesting it will be found soon, although diving operations were temporarily suspended on 13 January due to the weather.

Data from the FDR is expected to be downloaded and analysed over the next few days.

Flight SJ182 disappeared from radar four minutes into its flight from Indonesian capital Jakarta to Pontianak on the island of Borneo. First reports of an incident came from fishermen working off the Thousand Islands.

Investigations into the plane, a 26-year old Boeing 737-500 that had been mothballed until late December due to the coronavirus pandemic, are also underway. A team of technical experts is being sent by the US National Transportation Safety Board to assist the Indonesian government’s investigation of the crash 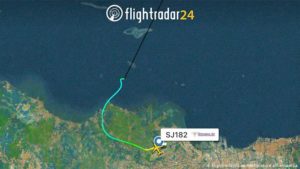 While recovery operations continue, the picture of those aboard flight SJ182 has become clearer. Names of the 50 passengers, 6 working crew and 6 deadhead crew have begun circulating. Seven of those on board were children.

Among the believed victims are multiple members of the same families. A pregnant mother travelling with her daughter, nephew, uncle and aunt are amongst those reported missing by relatives. It is also believed that another family lost five members: a married couple, their baby, and the husband’s mother and cousin. The husband worked for Indonesia’s Ministry of Environment and Forestry.

The 54-year old captain and 34-year-old co-pilot have been named as Afwan, who goes by one name, and Diego Mamahit respectively. A 29-year old flight attendant, Okky Bisma, was the first person formally identified by Indonesia police. All persons on board the flight are believed to have been Indonesian.

We will continue to bring you the latest as we receive it.

Bali has become well-known by Australians as a holiday hotspot, with up to 1.2 million Australians visiting the island per year. With recent statistics showing that Bali has the highest COVID-19 fatality rate in Southeast Asia and one of the lowest testing rates (0.02 per cent of the population in late March) in the world, Bali has closed up shop. The ramifications of this, however, could be catastrophic in a tourism-dependent economy. 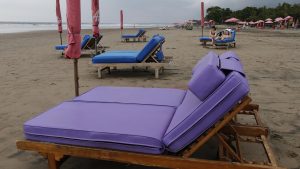 The Indonesian Foreign Affairs Minister, Retno Marsudi, announced in March that the only people permitted into the country were Indonesian citizens, diplomats, and family members. Essentially, foreign visitors have been banned from entering the island and locals have been put into lockdown. As a result, the normally-bustling beaches, hotels, streets, clubs, and religious temples have become ghost towns. 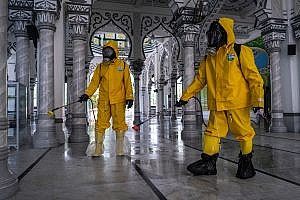 More than three-quarters of the Indonesian economy is linked to foreign visitors and around eighty percent of Bali’s market value is based on tourism. The closure of the island is showing the potential to be catastrophic, with tourism arrival statistics displaying a thirty percent decrease in February, the lowest it has been in four years.

“The Coronavirus has collapsed the Bali economy,” Mangku Kandia, a Bali Tour Guide who has worked in Bali since 1984, said. “It’s been a steep drop since mid-March, when social distancing measures were put in place. No tourist, no money.”

The lack of tourists is showing a drastic decline in currency, despite Indonesia being the world’s fourth-most popular nation.

“There’s been this huge transition where almost everyone has placed their eggs in the tourism basket,” Ross Taylor, President of the Indonesia Institute at Melbourne’s Monash University, stated. “The result of taking that away would be catastrophic. In Bali, most people earn only a couple of hundreds of dollars a month – they live from day-to-day or month-to-month. If they lose their jobs, they will have nothing to fall back on.” 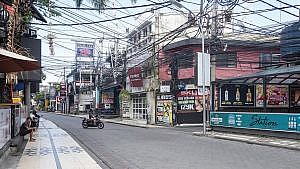 A normally traffic-jammed street in Bali is nearly deserted. Source: Made Nagi, EPA

A study conducted by the London-Based Centred for Mathematic Modelling of Infectious Diseases estimated that only two percent of COVID-19 cases in Indonesia would have been reported. This makes the decision to close Bali borders a necessary move. It is questionable, however, if the popular tourist destination will ever be able to make it back from the catastrophic circumstances.