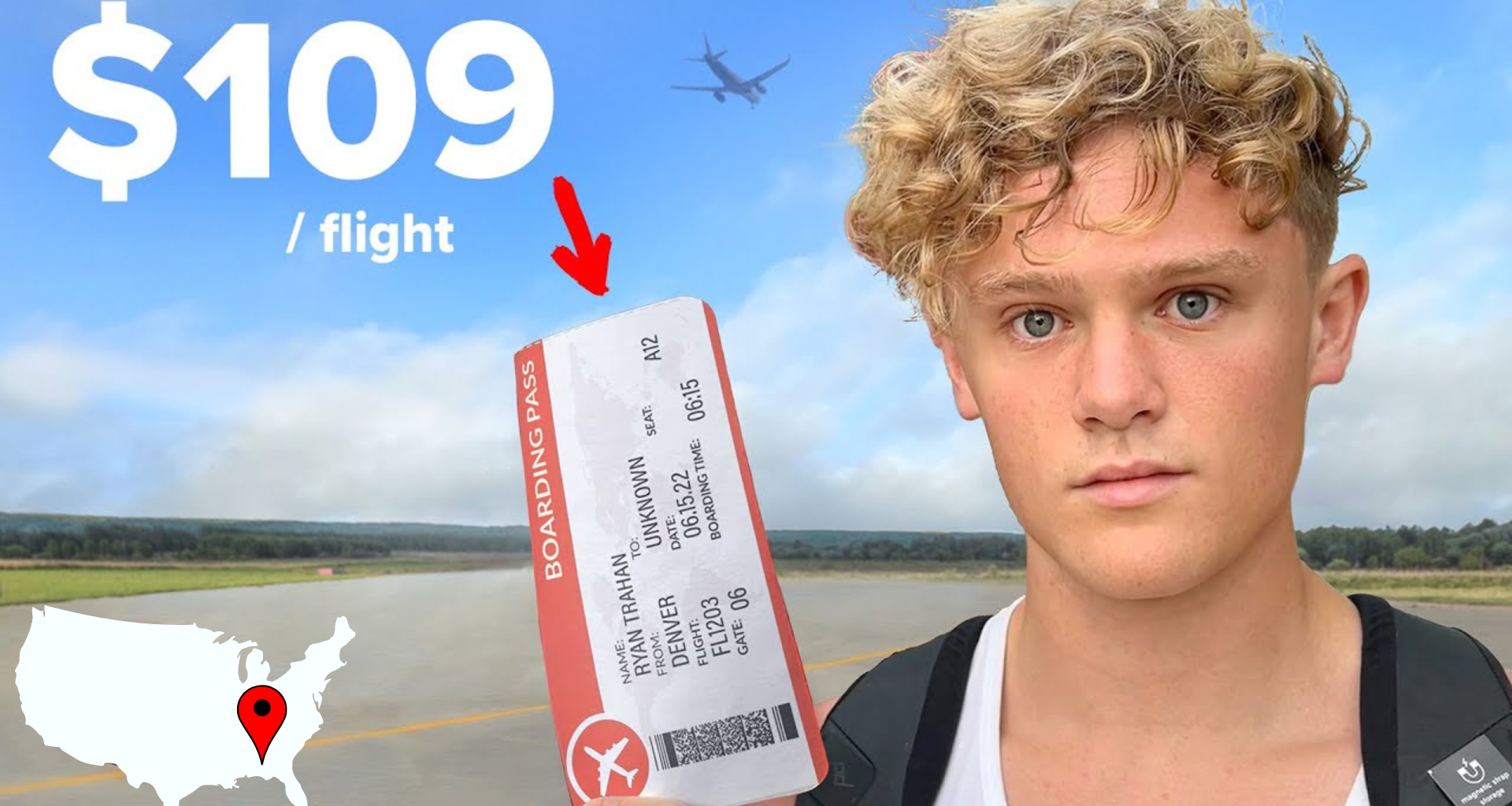 Ryan Trahan Is Flying Across America With Just A Penny

Okay, so admittedly this article has very little to do with aviation. Actually, it’s more of an outlet for me to express how much I love Ryan Trahan and everything he is doing now. But fear not, AvGeeks, there’s something here for you too!

If you don’t know who Ryan is, you’ve probably been living off-grid for about a month. But for those of you who’ve just rejoined us from the wilderness, Ryan is crossing America with just one penny to deliver a penny to MrBeast as they are going extinct in 2023. His YouTube series has seen him gain over 1.5 million new subscribers, while his daily vlogs reach more than 3 million views each making him one of the most-watched creators right now. However, he’s not chasing clout for the sake of clout. He’s on a noble mission to solve world hunger. More specifically, the series is a fundraiser for Feeding America.

Relying on the generosity of people all around the world, Ryan’s fundraiser just surpassed one million US dollars, surpassing his goal by more than ten times. In addition to this, Ryan is donating a penny for every new subscriber he gets during the 30-day challenge. It’s not only become one of the most-watched youtube series of all time but the most loved by millions around the world. It’s become such a big part of all of our lives, and with the challenge nearing its end, I don’t know what I’m going to watch at breakfast anymore!

How Ryan Has Changed The World With Just One Penny

In a world where affording a daily coffee requires a second mortgage and buying gas has become a commodity for the one percent, one penny won’t get you very far. Yet Ryan Trahan saw a penny and thought, “yeah, let’s cross an entire country with this.” One thing we do know about Ryan is that he is incredibly entrepreneurial. After dropping out of college to focus on his channel and water bottle business, for which he got into hot water during his time with Texas A&M, he’s since grown to reach over 9 million subscribers thanks to his innovative penny challenges. But how has he changed the world with just a penny?

Several factors contribute to his success, but none more than the human element of his content. It’s relatable, it’s humble, and it’s realistic. It’s a trifecta that you just don’t find on YouTube or social media, for that matter. Beyond the fact that the penny is going extinct in the US next year, the penny concept is something we can all relate to, and it’s accessible. Most of us have been “down to our last penny” at some point in our lives. Using a penny to raise millions of dollars also shows how anyone can go out there and make a monumental difference using the bare minimum. His content is inspirational, philanthropic, and just downright entertaining.

Nothing creates more success on YouTube than getting to live someone else’s life through a screen. And in many ways, we’ve all been living a bit of Ryan’s life every day through his daily vlogs. The genuine interactions he has with people and the characters he creates throughout each video give us life. Better yet, the humility and generosity of the many incredible folks he meets could well be humanity’s saving grace. But if there was one defining thing that makes Ryan Trahan a certifiable legend is that he puts blood, sweat, and tears into everything produces. Social Media has become a place full of fakes and replicas, but Ryan’s intentions and motivations are genuine and pure.

Above all else, this series has given the viewer a way to interact and manipulate each day of Ryan’s journey. With donations coming in thick and fast every day, the more wealthy viewers have quite literally had the chance to rewrite Ryan’s journey. A $50,000 donation from anyone triggers “the great reset“. The great reset is as it sounds; Ryan starts back on one penny, regardless of how much money he has at the time. In his most recent video on day 23, he was reset once. On day 22, he got reset twice. And in day 19’s video, he even got reset in person when a fellow YouTuber plotted the mother of all resets.

So where’s the aviation nerd-out in all of this? Well, Ryan hasn’t been hitchhiking or running across the US. As he’s always at risk of THE GREAT RESET, he uses the money he saves in each city to purchase a flight to the next city as a security blanket. After starting at his current home city of Los Angeles, he caught a cheap flight early in his adventure to sin city, aka Las Vegas. He went on to Denver, Colorado, before finally arriving in his hometown of Austin, Texas. Ryan has a flight booked for the next city, but there’s much debate over where he’s heading.

Many AvGeeks are debating likely destinations furiously in the comments of Ryan’s most recent videos, with many guessing at Atlanta, Georgia. While it makes perfect sense, given that it’s a popular, affordable route leading to one of America’s busiest airports, my guess is that the answer is not as straightforward. Firstly, it’s impossible to know where Ryan is at any given time due to uploads being delayed. Air fares also fluctuate significantly at the moment, so cheap routes right now may not have been affordable a few days ago when Ryan booked the flight.

Memphis in Tennessee is another city near North Carolina (the final destination) with super cheap fares from Austin. Allegiant Air is currently running $115 flights between the two cities, which is only a few dollars less than Ryan paid. Budget airline Spirit runs direct flights to Fort Lauderdale for around the same fare. Meanwhile, the cheapest direct flight to Atlanta comes in at a hefty $519 with Delta. Given the route’s popularity, the fare is likely to have increased significantly since Ryan made the booking. Ultimately, Atlanta does make a lot of sense. But I wouldn’t rule out a wildcard destination in Tennessee!

What We’ve Learned About Ryan’s Experience

This series has been full of entertainment, twists, emotions, and heartwarming moments. As viewers, there are so many takeaways such as generosity can still be found anywhere, and positivity is truly more infectious and Covid. But the biggest takeaway of all is that you don’t need anything to change the world. If Ryan can raise ten million meals for Feeding America with nothing more than just a penny, nothing is stopping you from leaving a positive mark on the world.

To support Ryan’s mission, please donate here. Remember, for every new subscriber in the month of June, Ryan will be donating a penny. So, subscribe!

Where do you think Ryan is off to next? Let us know in the comments!

Read Article
Major U.S carrier Delta Air Lines dropped an exciting bombshell at the 2022 Farnborough International Airshow after announcing…
Read Article
The US Department of Transport has issued a guidance document–‘Runway to Recovery‘–to airports and airlines on dealing with…