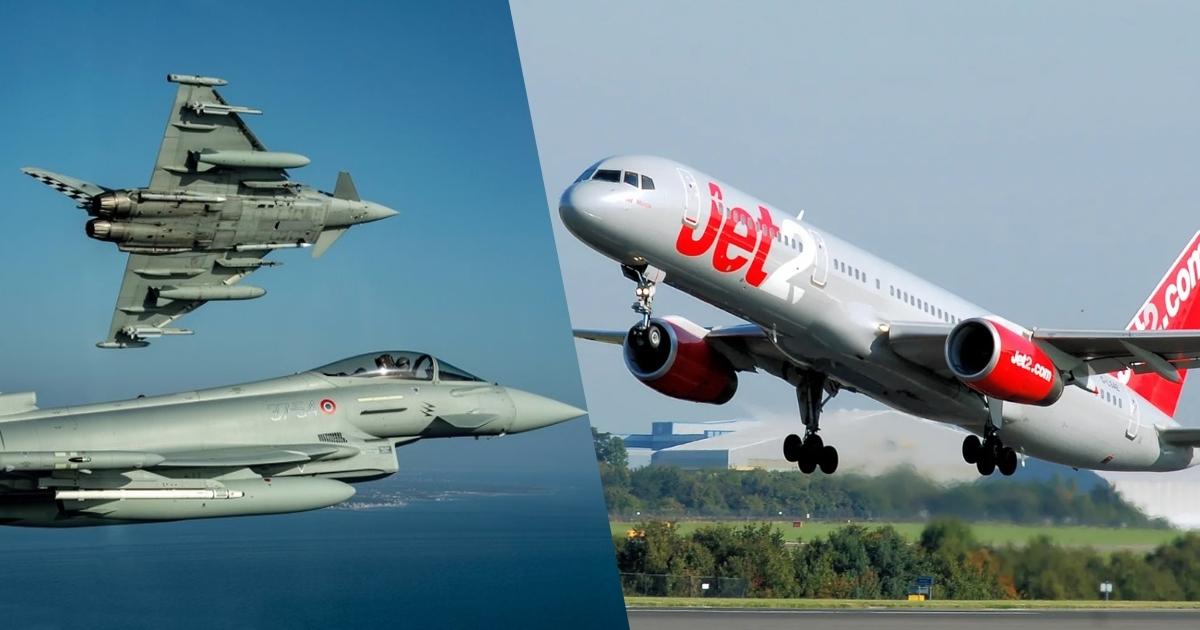 Jet2 flight LS922 was escorted back to Stansted Airport by RAF fighter jets following a report that a ‘bomb threat’ was present. The A321 safely landed at the Greater London airport, and police found no threat onboard. The runway was re-opened shortly after.

Two Royal Air Force Eurofighter Typhoon FGR.4 aircraft were deployed to guide an A321-211 aircraft back to London Stansted. The flight registered G-HLYB had departed Dalaman, Turkey, and was bound for Manchester Airport before being diverted due to a reported bomb threat.

The fighter jets were scrambled from Royal Air Force base Coningsby in Lincolnshire, making the 137km journey. Residents near the fighter jet’s flight path reported a loud ‘thunderous’ noise overhead around the time the jets were passing near the airport.

The plane landed at London Stansted at around 9:20 pm local time, forcing the runway to close while police investigated the aircraft for a threat. Armed police surrounded the aircraft as it sat on the runway as a precaution. Passengers on the plane took to social media to share photos and written updates on the situation as it happened.

Departures from the airport were reportedly halted for a short period of time while police carried out an investigation. A passenger onboard flight LS922 tweeted images of the plane sitting on the runway with armed response cars parked on the runway. Liam Thompson said in the tweet, “Sat on #LS922, nearly 3 hours since landing here with no news.”

A user replying to Mr Thompson’s tweet added, “initial reports seem to be that a drunk passenger made a bomb threat,” though we couldn’t confirm if this was indeed the case. Another Twitter user said, “cops were checking under the plane when it Landed.”

One more user commented, “wait till the press see this tweet and start badgering to use this photo.” Well, Ramouzz, no badgering was necessary.

Jet2 confirmed the incident a short time after via Twitter. The low-cost carrier said, “We can confirm that flight LS922 DLM to MAN diverted to London Stansted this evening under the direction of UK Air Traffic Control.”

“The aircraft has landed safely & has taxied to a remote stand. We are currently liaising with London Stansted Airport & the relevant authorities,” the airline’s statement continued.

“Shortly before 9 pm, we received a report of a potential threat on board the flight. It was escorted to Stansted, where it landed safely and was parked away from the main passenger terminal,” Essex police said in a statement. “The runway was closed for a short time while enquiries were carried out. Officers were then able to establish there was no threat on board. Onward travel was then organised for the passengers, and the runway was re-opened.”

It’s unclear what caused the threat report, with authorities not confirming the source of the threat. Some indications suggest a ‘drunk’ passenger made claims that a bomb was hidden on the plane. This would have forced the pilots of the plane to reset their transponder to the emergency code of 7700, known as squawking 7700, notifying all air traffic control towers in the immediate area that there is an emergency situation onboard.

All passengers returned to the airport terminal safely, with no casualties reported. Onward travel has been organised for those affected. The airport resumed all operations with no significant delays reported.

Why Are There Two Pilots in a Plane?